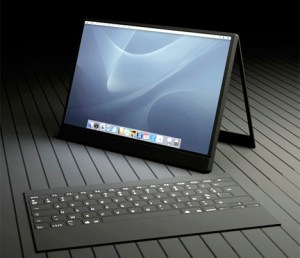 With all of Apple’s major hardware revisions out of the way after last week’s upgrades, the focus of pundits and fanboys alike can once again turn to mysterious new Apple products. No, I don’t mean the mysterious new iPhone, which Apple may or may not be testing ahead of a summer launch — I mean two entirely new products that may or may not exist at all: An Apple netbook and an Apple tablet.

I put both out there because it’s not entirely clear what the new touch-screen panels supposedly meant for Apple products imply. Hell, with no dimensions given, they may even be for a new iPhone. But the Taiwan-based Commercial Times thinks differently. It believes that Apple is working on a netbook, to be built with the help of Quanta Computer, using touch panels made by Wintek, according to DigiTimes.

In the report, Wintek says it doesn’t know what Apple will use its touch panels for, and it’s not clear if by “netbook,” Commercial Times actually means a netbook. After all, Apple has time and time again said it has no desire to be in the netbook market right now — that netbooks are, by definition, cheap, and that it doesn’t know how to make a cheap computer that isn’t junk.

It’s possible that by “netbook,” the paper actually means tablet computer. It has been rumored for a while that Apple is working on a device that would be similar to a large version of an iPod touch. And such a device seems more in line with the products Apple likes to make — meaning that it would likely be full of quality components and thus, not cheap, while maintaining the all-important high margins.

At the same time, Apple chief operating officer Tim Cook (who’s running Apple while Steve Jobs is out on medical leave), has seemed more open to the possibility of netbooks. He’s noted a few times that Apple is watching the category closely and will make a move if it feels the opportunity is there.

But you can be sure that even if Apple did make a netbook, it would push the limit on the category and the name itself. Perhaps it would even build a device that is sort of a netbook/tablet hybrid, similar to the Touch Book device Always Innovating unveiled at DEMO last week. That device has a large touch screen that can detach from its keyboard to transform from a netbook into a tablet.

While the Touch Book runs its own flavor of Linux, the company says it will let users install any operating system it wants on the device. Of course, Apple will not allow OS X to be put on a computer that isn’t one of its own, so if you want an OS X netbook/tablet, Apple is going to have to build it.

And if it does, you can be sure it will cost a lot more than the $299 to $399 that Always Innovating is selling the Touch Book for. And likely even more than the standard $500 netbook price threshold, as Apple 2.0 predicts.

Whatever the Apple product may or may not be, it’s likely to ship in the second half of 2009, the Commercial Times notes. That is, if it exists at all.