At some point over the past five years, emojis evolved from a niche into an important form of communication — a point that hasn’t been lost on Apple. Having previously suggested new professions and diversity icons, the company today pitched the Unicode Consortium on a collection of 13 new emojis “to better represent individuals with disabilities,” which it deems “an initial starting point” towards more comprehensively depicting disabilities.

As noted by Emojipedia, Apple developed the new emojis in conjunction with the American Council of the Blind, the Cerebral Palsy Foundation, and the National Association of the Deaf. The collection includes:

The human versions are each suggested to come in multiple skin tones, while the canine companions are differentiated based on the differing purposes of guide and service dogs. In total, 45 emoji variations have been proposed. 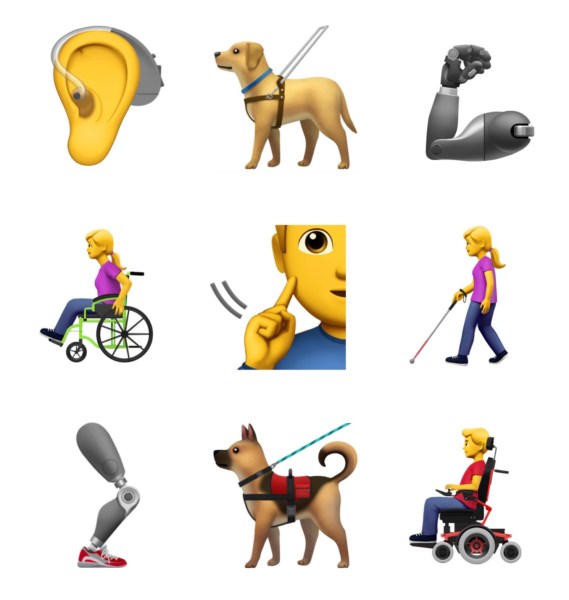 Unicode’s Technical Committee will meet next month in San Jose to discuss these and other emoji submissions. If approved, the earliest they would be likely to appear would be the second half of 2019, when Unicode 12.0 is released.

Apple generally adds new emojis annually to iOS, including foods, animals, objects, and people that Unicode deems worthy of graphical representation. The company also added Animoji — 3D augmented reality versions of animal emojis — to the iPhone X last year. Emojipedia notes that the 2018 Emoji 11.0 list was finalized in February and will appear on devices in the second half of this year.