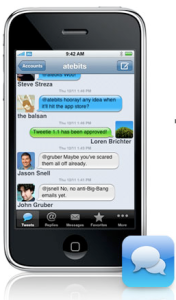 iPhone app developer Loren Brichter is mad as hell. Why? Because Apple has rejected the latest version of his brilliant Twitter app, Tweetie. So what did Britcher do wrong? Well, nothing.

The problem, at least according to Brichter, is that Apple doesn’t like the profanity found on the Twitter Trends part of the service, which displays items popular on the micro-messaging service. Of course, Brichter has absolutely nothing to do with that, as he doesn’t control what people tweet on Twitter. But Apple is apparently saying it won’t approve the app until this profanity is gone — which, of course, is ridiculous as there are several Twitter iPhone apps that use Twitter Trends data, and none of them have been rejected. [Update below]

Brichter says on Twitter that he has let Apple know about the other apps and is demanding that all of them be pulled for questionable content if Tweetie is. Probably not the most gentlemanly move, but a bold one that will force a decision from Apple. And I think we all know what the right one is: Accepting Tweetie back into the App Store.

If Apple thinks developers can or should filter what people say on Twitter, it is of course mistaken. And if it feels it can block all iPhone apps that use Twitter without such filters, then more power to it, but that won’t go over well with iPhone users — at all.

If there’s any silver lining here so far, it’s that Apple at least sent Brichter a picture of what the problem was with his app. As Brichter notes, this is much better than the early days of the App Store, when Apple would simply reject apps without saying why.

Update: Apple has now allowed the new version of Tweetie into the App Store.