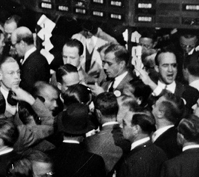 It appears as if the bad overall economy is nailing some key tech stocks this morning. Apple, Google and Yahoo are all down significantly right now in early afternoon trading on the stock market.

None are faring worse right now than Apple, which is currently down over 16 percent, in the $107-per-share range. It had dipped as low as $106.88 this morning. How large has Apple’s stock fall been? While back in December of 2007 the stock was above the $200-a-share mark, as recently as mid-August it was right around $180-a-share.

While Google’s 8 percent drop may look relatively tame this morning compared to Apple’s 16 percent one, the stock has fallen below the $400-a-share mark for the the first time since mid-2006. The stock opened the day at $420-a-share, but found itself as low as $395 this morning. 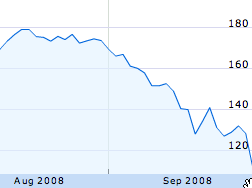 Recent Internet punching bag Yahoo, meanwhile, may only be faring better than Apple and Google because its stock price was so much lower to begin with. Its stock is off over 6 percent today, pushing it well back below the $18-a-share range. If there is some good news for Yahoo, it’s that it has yet to dip below the $17.25-a-share low it hit earlier this month.

Back in February, Microsoft made an offer to buy Yahoo for $31-a-share. Yahoo’s stock price at the time was $19.18, but the company still felt that deal (which was about a 62 percent premium) massively undervalued it. Microsoft indicated that it was willing to move that price slightly higher in the $30s, but Yahoo didn’t budge.

Could this be bargain basement time? Microsoft’s stock, while down, is faring much better than much of the rest of the market, being down “only” 2.75 percent. Talk last week was that Microsoft could buy a Yahoo/AOL hybrid if those two decided to merge, but that could have just been an effort by AOL to drive up its own price.

While Apple’s plunge likely has a lot to do with its ratings cut, Google and Yahoo appear to just be getting hammered by the overall weakness of the market. The Dow is down 2.8 percent — nearly 300 points, while the Nasdaq (where all three of these tech companies are listed) is down closer to 5 percent overall today.

Those who thought it was a good time to buy last week, must think it’s an even better time to buy now — or are kicking themselves.

Update: The Dow is falling off a cliff right now. Whereas it was down around 300 points while I was writing this, it’s now down closer to 700 points — over 6 percent. The Nasdaq is down almost 145 points — 6.63 percent.

Update 2: The tech stocks are getting nailed even worse now. Apple just hit the $100-a-share mark (and is now rallying a bit), Google is down to $385-a-share.

The Nasdaq and S&P 500 both saw their worst percentage drops since the stock market crash of 1987.

When all was said and done, approximately $1.2 trillion — yes, trillion — in market value was lost today.

We compiled a list of some prominent tech companies that hit or came close to hitting their 52-week lows today. 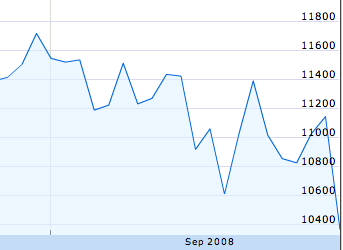