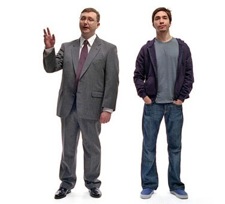 There’s been a lot of talk recently about how much money Microsoft is spending (and some would say wasting) on its new advertising campaigns to promote its brand. Of course you’ve seen them: The Bill Gates/Seinfeld ads and the newer “I’m a PC” ads. But there hasn’t been much focus on how much Microsoft rival Apple is spending on its advertising. You might think it’d be hard to get a figure out of the ever-secretive company, but BNET’s Technology Industry Blog was able to dig the figure up from Apple’s 10-K filing.

Apple had an advertising budget of $486 million in 2008. That’s up only slightly from its $467 million budget last year, but significantly ahead of its 2006 ad budget of $338 million. Why has it risen so much in the past two years? Hard to know for sure, though I’d guess it’s because of a certain device that launched in mid-2007: The iPhone.

While Apple’s “Mac vs. PC” ads are the ones that get a lot of hype because they’re humorous, its iPhone ads are arguably more effective and important. After all, they show the device in action, and for a lot of people, seeing is believing. That’s why getting air time on these ads is such a big deal for individual app makers like Loopt, Urbanspoon and Shazam — all of which saw their app downloads surge after being featured in commercials by Apple.