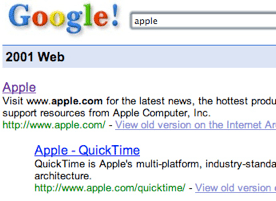 Is Apple building a search engine? That’s the question TechCrunch poses after hearing several (thin) reports along those lines. The likely answer is no. At least, not like you’re likely thinking if you just read the title of that post and the first few paragraphs.

You see, it would be rather foolish for Apple to attempt to build a web search engine. (The type most often associated with that term.) Google dominates that space like Tiger Woods dominates the PGA Tour. Several startups have tried to penetrate that space and are floundering (Cuil, etc). Even a huge player like Microsoft can’t get people to use its search engine instead of Google’s — even after paying them to do so!

That doesn’t mean someone shouldn’t try to challenge Google in the space and move search innovation forward, but a legitimate contender to Google isn’t coming around anytime soon. It’s not like Microsoft’s Internet Explorer’s dominance a few years back where it needed to be challenged — as it was a crap product. Google search, for the vast majority of people, just works, and they’re happy to use it.

And that likely includes Apple. Google search is built into products like Safari (though, TechCrunch’s Mike Arrington is partially wrong in saying that you don’t have a choice — for the iPhone/iPod touch you can change that in the settings, oddly, you can’t without a hack on the desktop version). And Google recently redesigned its main search results page to be better tailored to Apple’s iPhone. It’s a really nice experience now, far beyond what phones in the past have offered. 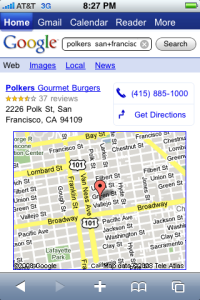 So where does that leave “Apple Search?” Well, if I had to guess, I would say that it’s possible (and maybe even probable) that Apple is working on some kind of search technology to tie together various products. This doesn’t mean web search, but instead more like its Spotlight feature within OS X. That is, a quick lookup engine that scours the files on your computer, both their names and the content in them.

Something like that would be great for the iPhone as it continues to transition away from a (relatively) simple smartphone, and into what is, let’s face it, basically a computer. With more applications on the device, there will be more of a need to search for things. And perhaps more importantly, given what Apple has been doing with products like MobileMe, its cloud storage/syncing service, and even small applications like Remote for the iPhone and iPod touch (which works with Mac computers and the AppleTV), the company seems ripe for a search technology to tie all of its products together.

Imagine a search feature on the iPhone that could quickly look through files on your home computer (which it would be synced to, kind of like the Remote app is now) or on MobileMe. It would make the iPhone even more of a computer in your hand.

There are a few third-party apps that somewhat do this, like Searchlight, but that’s only for computer searching. Tying in MobileMe and perhaps other devices (Apple TV, multiple computers, etc) and of course, iPhone searching itself could be very useful. And never underestimate Apple’s ability to tie everything together with a great user experience.

TechCrunch thinks Apple’s search endeavors aren’t going to lead it to make a new search engine, but rather a new user experience for searching the web — with Google results. That’s certainly possible as well, but I would just add that to what I’ve said above. Maybe Apple will tie in Google results to its mobile search application if a user so desires.

I’m just thinking out loud here, but the idea doesn’t sound so farfetched, does it?