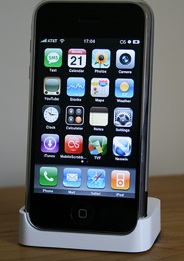 Apple chief executive Steve Jobs likes to wow the crowd during his keynote addresses with his “boom!” moments and then saves the best for the end with: “One more thing…” This summer, potentially at the WWDC conference, he may have two perfect candidates. The “boom” would be the 3G iPhone. The “one more thing” could be its price: $199.

Yes, you read that right.

When the 3G iPhone is released this summer (and we are saying “when” and not “if” at this point), AT&T is ready to shave as much as $200 off the cost of the phone, according to Fortune, which says it has a source familiar with the matter. This discount would be applied when customers sign a new 2-year agreement.

Rumors have been around for a while that Apple and AT&T would discount the current crop of iPhones when the 3G model hit, but this is the first time anyone has said that the companies would be willing to lower the price of the new 3G version.

It wasn’t even a year ago that the iPhone was launched to the public at the steep price of $599 (the 4GB version, which no longer exists, was only $499). There was some public outcry because AT&T was not subsidizing the cost of the phone even though purchasers had to sign a 2-year contract with the company. A few months later Apple decided to slash the prices by $200, and now we’ll have our subsidizing — making for a very affordable $199 iPhone.

The newer 3G (the cellular broadband network, faster than the current network, EDGE) iPhone models are expected to come in the current capacities of 8GB and 16GB. However, the larger, 32 GB capacity which Apple uses for the iPod Touch, should not be ruled out either. The older models would be discontinued.

If this price-cut is in fact intended for the 3G iPhone and not the older models, BlackBerry and other smart phone makers are in big trouble. Not that they weren’t already.

The Fortune piece goes on to say that the new iPhone will be 2.5 mm thinner than the current version (which goes against the reports from a few days ago), will have a GPS chip (which has long been rumored) and interestingly, “other location-based services.”

update: I was just chatting with a friend who shied away from buying an iPhone last year and wasn’t sure about getting one this time around. When I told him about the new potential $199 price, without hesitation his reply: “I’ll be getting one then.”