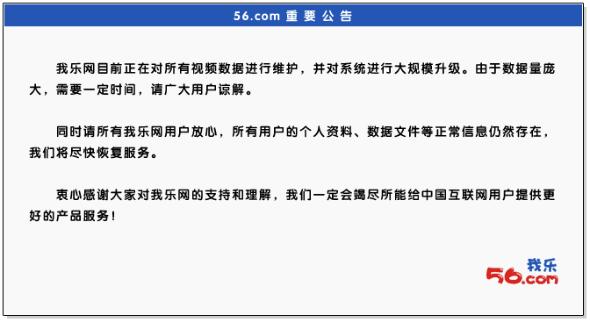 56.com, the third largest online video-sharing site in China, has been offline since June 3rd. The company says the cause is “technical” problems, via the error message pictured above, but there are two other possible reasons.

The first is that the Chinese government simply shut it down to censor content on the site. That possibility has been covered by a number of prominent China bloggers, this publication and now a number of Western media outlets, and has led to speculation that 56.com’s mysterious downtime implies new and greater risks for any video site, including market leaders Youku and Tudou.

If nothing else, the site being down for so long is perhaps fatal, and a blow to a lot of big names in technology investing that are looking for hit investments in China, and have put money into 56.com. More on that, below.

Fueling general speculation about censorship shutdowns, a new set of government regulations were implemented in February that require any online video companies to get a license certifying that a government-controlled entity has at least a 50 percent stake in it. While none of these three sites have received licenses to officially operate, smaller competitors have.

But even if the government did shut down the site, the move may not be a concern for neither rivals nor rival investors. The most recent rumor I’ve heard going around in China is that 56.com wasn’t adequately censoring videos about the recent, devastating earthquake in China’s Sichuan province from the site.

Both Youku and Tudou have assured me that they’re very careful about following government regulations, saying that because they are the largest sites in China, they face the most scrutiny from the government before getting approval. Both say they work closely with the government to ensure that content is compliant. The fact that Tudou only went down for a day or so in March, and that Youku went down for only an hour on June 4th (both incidents were also officially called technology problems) suggests that they are keeping the government satisfied.

In fact, even though all three sites are variably referred to as the “YouTube of China”, differences have emerged that may already have left 56.com worse off than its larger rivals, regardless of if or when it comes online. Differences that go beyond similarities, such as the presence of pirated content.

Shanghai-based Tudou started first among the three, in the first half of 2005 — around when YouTube, France’s DailyMotion and a number of current worldwide market leaders also rose to prominence. In some sense, it is the most mature. It claims more than 100 million daily unique video views and more than 60 million visitors a month.

It has stopped focusing on growth, chief executive Gary Wang tells me, to focus on making money. “It comes to a point where there’s no point in ramping up traffic without coming up with something real on the revenue model,” as he puts it. But the company has yet to break even, he says — although he adds at the rate the company is going, it will at least break even relatively soon. The question is how it can increase its profit margins, as video hosting can cost millions per month for these larger sites.

In search of profit, it has spent the last nine months testing “everything you can think of” he says, learning about user behavior, as well as how to identify users based on sex, age, and other demographic information. Now, the company has put together months of data about users that it can show advertisers. But like any internet startup in China, Tudou still faces many issues. A big one is unreliable third party traffic data, as we’ve covered. Another is a morass of online ad formats developed individually by larger companies including Sohu, QQ and others, that make it difficult to impossible for large brands to buy across many sites, especially smaller independent sites. Both problems reflect the relatively early days of the internet in China and presumably will be sorted out as online traffic continues to grow.

Tudou says that it is no worse off than the many other large video sites trying to address monetization, and aside from questions around censorship and the current profitability of the Chinese online ad market, that seems to be true.

Youku is approximately the same size as Tudou, at least according to most third party estimates I’ve heard (which are themselves questionable, remember). While Wang says Tudou is the biggest, Youku’s chief executive, Victor Koo, says that it’s Youku.

It is a younger company, as Koo actually left his job as president of Sohu, the online conglomerate, to start Youku around two years ago. 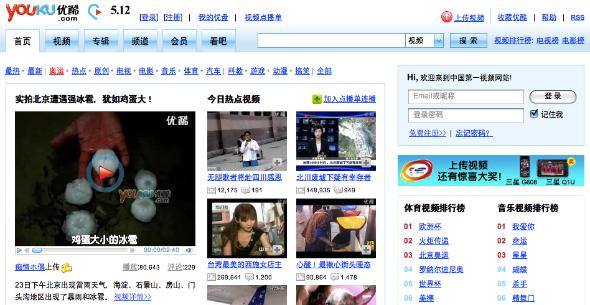 Koo’s connections could mean that he and his company have the relationships to counter both censors and ad-sales issues. Youku has distribution deals with television stations around the country. With millions of Chinese moving to work in booming urban areas, Youku has become another way for many to keep track of the news back home. Meanwhile, because these television stations are already self-censoring for the government, Youku doesn’t need to worry about repercussions for republishing their content.

A focus on syndicating professional content, along with its censorship efforts, are examples of what Koo says is his company’s effort to be a “socially responsible web site.”

On the money side, Sohu could also be a way for Youku to develop its advertising. The two companies became strategic partners last November, and Sohu’s existing relationships with advertisers could mean a faster path to more revenue for Youku.

Where does this leave 56.com?

While 56.com is said to be substantially smaller than its two rivals, it is also a the leading widget maker in the country, analogous to Slide and RockYou. As Chinese social networks start building platforms and giving third-party developers to their sites (like American rivals including Facebook and others have done), it would seem new opportunities await the company. But then again, social network application companies everywhere face the same question as video startups. These are questions that have led many investors to lose interest in either market segment anywhere in the world.

So, besides possible earthquake-related censorship, perhaps it is 56.com’s place at the intersection of video and social networking apps that could be behind its downtime. Could it be that 56.com has run out of money, or gotten close enough to running out of money that its investors have pulled the plug?

There’s already a striking example of something like this happening. Stage6, a fast-growing video site owned by DivX, was shut down last year because it was unprofitable. Investors were confused about whether or not to sell, and their deliberations led to employee defections, which led to a site with no clear future, with no one to keep it alive.

Meanwhile, one source tells me that Youku is spending $2 million a month to run its site, while Tudou and 56.com are each spending between $1 million and $1.5 million (aside: take these numbers with an especially large grain of salt until they’re confirmed).

To handle those burn rates, Tudou and Youku have both raised very large private equity rounds in recent months, while 56.com hasn’t, at least as far as I know.

Meanwhile, 56.com’s investors include name-brand Silicon Valley firms like Sequoia Capital and Disney’s Steamboat Ventures, not to mention software giant Adobe Systems and private equity firms CID Group, Susquehanna International Group China and Hikari Private Equity, an arm of publicly traded Japanese mobile conglomerate Hikari Tsushin). The latter two firms led a $20 million round in 56.com, last December, on top of a previous round of $6 million, although it may be that the company has raised additional funding along the way.

Sequoia, at least, knows the difference between success and failure in online video, having been a well-rewarded investor in worldwide online video market leader YouTube.

So, 56.com has half the cash of Youku, a third the cash of Tudou, with fewer high-placed friends in China, a smaller market share, and category-wide headwinds from newly skeptical investors.

Even all these things considered, it’s hard for me to believe that such marquee technology investors would want to shut it down. If nothing else, the combination of the company’s video and social networking services must one day be worth something more than they are now, if one has even a relatively low expectations for either category.

Maybe it’s just a case of 56.com having less stringent filters than its peers in hopes of drawing in more traffic, in which case it might come back once it gets in line with the others.

But the company and its investors have not commented on why it has been offline for nearly three weeks, and the longer it goes offline, the less likely it seems it will ever return. Even if the investors haven’t shut it down yet, the downtime may be the fatal blow against the company’s efforts to raise another, almost certainly necessary funding round.