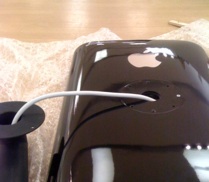 This Friday at 8 AM local time, Apple will unleash the iPhone 3G upon the world. As anticipation builds, the next few days are sure to be chock-full of information and maybe even a few surprises.

Amazingly, in some of the larger markets such as New York City, lines started forming a week in advance. Beginning today, those dedicated souls will have some eye candy as Apple is rolling out its new iPhone 3G window displays, according to Gizmodo. If you’d like an iPhone 3G a few days early, you can get one — but it’ll be three feet tall.

Interestingly, this display does not appear to be running the 2.0 software yet (though it does have the 3G icon in the signal bar). As you can see in the picture below, the contact area has no search functionality (a feature of the 2.0 software). Could Apple be waiting to update these displays to hide a few final surprises it has in store for the roll-out?

The 2.0 software is somewhat of a mystery in and of itself. When Apple indicated at the WWDC event that the software, along with the App Store, would be available in early July, many assumed that meant it would launch on July 11 as well. However, some are suggesting it could launch a bit earlier, perhaps as early as tomorrow.

This is certainly a possibility. After all, you don’t need an iPhone 3G to use the 2.0 software or App Store. The first generation iPhone and the iPod Touch device will be upgradeable. And we know the 2.0 software is complete. Perhaps Apple will give the early-adopters a “gift” in releasing it to them a few days early?

The deadline to submit applications for inclusion in the App Store launch passed at noon today. Though Apple appears to have many of these developers on lock-down, afraid to talk about their apps, we can probably expect to start hearing about quite a few of them in the coming days.

Like any rational human being, I’ll probably hold off on waiting in line … until the night before. Given the fact that every iPhone must now be activated in stores (likely adding at least 15 minutes per person to the buying process), this year’s lines may make last year’s look like the ones for an amusement park ride on a rainy day.

[Check out MobileBeat, our mobile conference on July 24.]