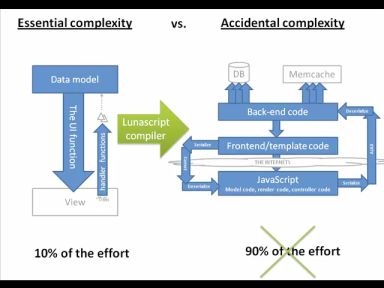 It’s an in-house programming language, named after Moskovitz’ cat, that the company claims will cut 90 percent of the time needed to code rich web applications. (You can check out a video here.) Asana co-founder Justin Rosenstein explained to us when we covered Asana’s $9 million round of funding that programming for the web requires a lot of rote and repetitive grunt work:

“We’ve been continually frustrated by how long it takes to write software, and by a nagging feeling that in some deep sense we’ve been writing the same code over and over,” the company said today. “Even when using the latest and greatest frameworks and disciplines, writing fast, highly interacting web applications involves a lot of accidental complexity.”

Lunascript eliminates the need to write separate code to help the server figure out which values need to be sent to the client. The server actually simulates the user interface. The compiler can produce a functioning web application that handles both the client-side JavaScript, and the server-side SQL.