Question and answer company Avvo, a competitor of Quora‘s that focuses on medical and law queries, is fighting off legal battles while developing its service. It has one goal: make these otherwise elusive professionals as accessible as possible.

The company wants to riff on what Quora has done for instant-gratification question-and-answer services, specifically for legal and medical questions. Avvo originally began as a website dedicated to ranking lawyers, and it soon added doctors. Using proprietary software Avvo calls Hoover, the company scrapes the Internet for public résumés and information to compile individual profiles for lawyer and doctors across the country — whether they want to profile or not. In fact, Avvo has rated what Britton says is 97 percent of the doctors and lawyers in the United States. The company then, based on a set of metrics, rates each professional and allows consumers to do the same, as well as leave reviews about that professional. Much like a Klout for doctors and lawyers.

This didn’t sit well with lawyers, however, who proceeded to sue Avvo just nine days after its inception. 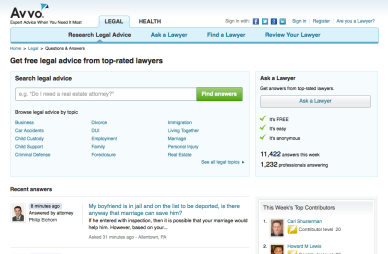 Above: Click on the screen shot to see a full view of Avvo's Q&A service.

There are two road blocks that prevent lawyers and doctors from having great online presences, according to Britton. Lawyers have no bedside manner. They speak in industry-specific words, but given the nature of their work with defined wins and losses, lawyers have a great story to tell. Doctors on the other hand, have an excellent bedside manner and can easily give out advice, but they are bound by doctor-patient confidentiality and other legal concerns when sharing information about practices.

Because of these factors, the online conversation between doctors, lawyers and worried citizens was mute, so Avvo built a question and answer service on top of its existing doctor and lawyer directory.

“We’re a company that’s here to make money,” said Britton, “But we believe the only way to build a business is to be completely transparent with consumers.”

That transparency is what Avvo banks on to encourage doctors and lawyers to actually use the service. Since the doctor or lawyer’s past information is already on the site, misconduct and all, those professionals really have nothing to hide. Recently, Avvo introduced game mechanics to the Q&A process. Professionals who respond to consumer queries with well thought out, helpful information, get points to display on their profiles. This increases that professional’s visibility and may make them more desirable to a consumer looking to use their services.

Avvo is still fighting off angry doctors, lawyers and organizations trying to protect their Rolodexes. Some professionals even make consumers sign clauses saying they can’t review a doctor online. But Britton has a message for his company each time it is attacked:

“If it’s not frightening, it’s not important.”

Check out the video interview of Mark Britton to find out more about the company and where it is headed.