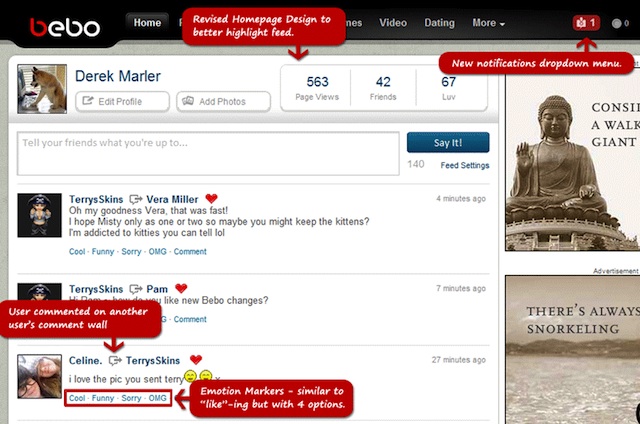 Social networking site Bebo has only been in the news sporadically since AOL sold it to Criterion Capital Partners last June, but the company says it has been steadily rolling out new features. Today, it’s unveiling a redesigned home page.

The redesign doesn’t look like a dramatic shift, but it’s another sign that the team is continuing efforts to revitalize the site — as a spokesperson told me, at Bebo “the culture has shifted back to that of a sleepless start up.”

According to a Bebo blog post, the home page has now been “placed on a diet to reduce unnecessary clutter and place more focus onto what’s important, the new Feed.” The Bebo news feed has been expanded to show more information about user comments and to add Bebo’s take on the Facebook “like” button. Instead of just liking something, Bebo users can respond to comments and updates with one of four “emotion markers” — Cool, Funny, Sorry, or OMG.

Other changes include a more prominent notifications menu and a new feed highlighting activity for each individual user. This is on top of recent additions to the site that include friend suggestions, video chat, and Facebook Connect integration.

If you’re still inclined to count Bebo out, it’s worth remembering that the company has brought in some high-profile names as well. Bebo co-founder Michael Birch invested in the site again and serves as an advisor, while Xbox co-creator Kevin Bachus joined as chief product officer.

A spokesman said that after the acquisition, Bebo’s traffic jumped to 12 million unique visitors per month, then fell to 10 million. As the company added new features, traffic climbed again, most recently to 12.7 million uniques. And mobile traffic has doubled from 750 million to 1.6 billion pageviews per month.