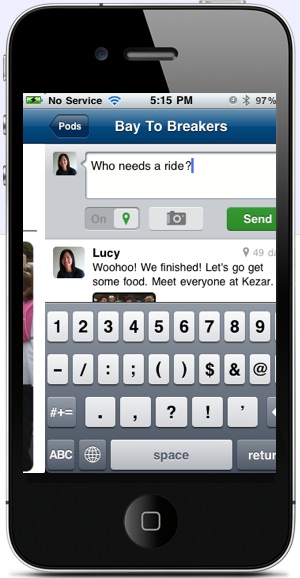 Facebook has acquired Beluga, the mobile group-chat startup founded by three former Googlers. And in contrast to most of Facebook’s other deals, it looks like the company may actually use Beluga’s technology.

Beluga allows users to create “pods” of friends with whom they want to share text messages, images, and emoticons. The service launched in December, and there seems to be increasing interest among both consumers and investors in group-chat products from companies like GroupMe and Ning.

We’re psyched to confirm that we’ve just acquired the talent and assets of Beluga, whose simple and elegant mobile apps blew us away as a solution to help groups of friends stay in touch on the move. We’re looking forward to welcoming co-founders Ben Davenport, Lucy Zhang and Jonathan Perlow, and we’re excited that the team will continue their vision for groups and mobile communication as part of Facebook.

Facebook has been a big acquirer of early-stage startups, but those deals have usually involved hiring the team and then shutting down the service. Last year, chief executive Mark Zuckerberg said, “We have never once bought a company for the company. We buy companies for excellent people.” (This practice is definitely not limited to Facebook, but it seems like Facebook has gone the furthest in this direction.)

On one level, the Beluga deal seems to follow this pattern, since this brings three former Googlers into Facebook, and there’s been a lot of press between the talent war between the two companies.

But there are also signs that this deal could be a little different, as TechCrunch’s MG Siegler argues. The Beluga team says that the service will continue to operate for now, and there will be “more details on future plans for Beluga.” A Facebook spokesperson told me, “As we say above, we bought both the talent and assets, so I think that characterization of talent and technology is right.”

To be clear, Facebook hasn’t shut down every service that it acquired. FriendFeed is still running, but Facebook hasn’t really developed the service in any meaningful way, and it seems the main thing the company got out of that deal was the hire of Bret Taylor, who’s now Facebook’s chief technology officer.