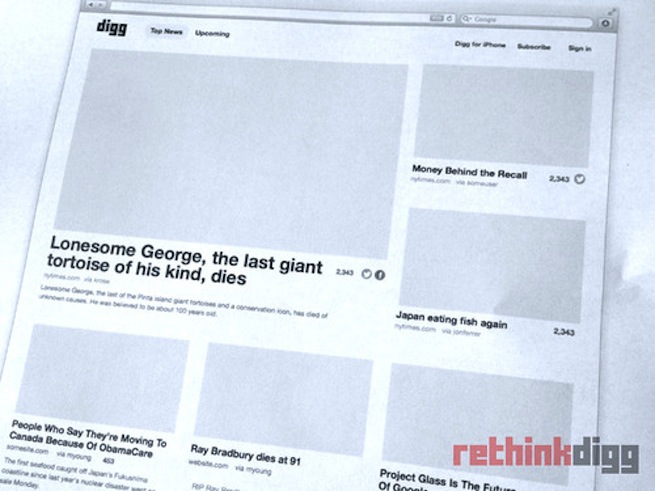 Betaworks is showing off a preview of its forthcoming Digg v.1 redesign today, which looks much cleaner and less convoluted that the current version.

Originally launched in 2004, Digg was the first of the big community news sharing social networks, which allowed users to vote on community submitted URLs, with the best stuff rising to the top for increased presence. The site began its fall from grace in 2010 with the launch of revamped (and somewhat contradictory) news gathering system that allowed web publications greater control over what was submitted. The changes led to decreased user activity and, in turn, less traffic to web publishers. More recently Digg was sold to Betaworks, which later announced it would be building a brand new, stripped down version of the site from scratch.

Today the new owners published a blog post about how the new Digg will function and what people can expect.

“The experience must be fast and thin,” Betaworks wrote. “Let users go, and they will come back to you. We optimize for return visits, not page views per visit.”

This particular comment from the Betaworks team pretty much hits the nail on the head in terms of what was wrong with the old version of the site. Digg’s previous owners concentrated on changes to the site that would build relationships with publishers — promising them high traffic gains, analytics, promoted story ad opportunities, etc. These changes degraded the overall Digg user experience and then assumed that people wouldn’t look elsewhere (meaning other social media channels like Twitter and Facebook) to find their news/web content.

The new Digg v.1 basically tosses out any feature that doesn’t directly enhance the user experience.

The team is getting rid of the “Diggbar,” a frame that displayed a navigation bar at the top of any website that was submitted to Digg. The point of this feature was to keep users engaged on Digg, which was constantly sending users outside of the site to view content. In practice, it caused much pain for users and often prevented them from seeing submitted content easily. Additionally, Betaworks is getting rid of the “Newsrooms” feature, which was far more useful for publishers than core Digg users.

The Betaworks team is also simplifying and renaming the news streams.

The “newswires” stream, which consists of new user submissions that flow in real-time, will once again be called the “upcoming” stream. And ripping  a page out of Reddit’s book, the new Digg v.1 correctly distinguishes between the most popular stories (stories with the most votes/site activity), and “Top Stories” aka Reddit’s “What’s Hot” tab. The popular stories stream consists of what people say they like the most, while the “Top Stories” stream will now be an actual representation of that sentiment that goes beyond Digg. The old Digg treated these two streams as one constant stream (aka Digg’s front page).

The “Top Stories” stream of content will act as a sort of real-time news gathering aggregator that heavily relies on Bitly’s Realtime short URL search engine technology, as VentureBeat head honcho Matt Marshall wrote about Saturday. I’m assuming activity from Digg users will be the basis for the “Top Stories”  aggregation algorithm, but tweeting, retweeting, liking, stumbling, etc. will also have a big impact. (As a side note, this should also help ensure the “Top Stories” stream isn’t easily gamed by spammers.)

One thing that will be absent at the time of launch is a working comment system. Betaworks said that conversation is already happening on other social networks and to “do it right,” Digg’s comment system needs to take that into account. I can’t say I disagree with the logic, especially since comments on Digg are rare these days.

As for the overall “Rethink Digg” preview, Betaworks makes a compelling case for long-time, inactive Digg users (myself included) to check out the new site when it launches.

Check out some shots of the new Digg v.1 from Betaworks below, and let us know your thoughts in the comment section.