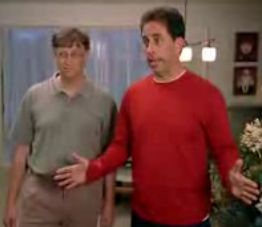 Before I say anything about the new Microsoft/Seinfeld ad, let me just say that I’ve only watched the uncut four and a half minute version. When re-cut as a television spot — they’re usually 30 – 60 seconds — it could have a different feel. That said, this one is better than the first one, but still pretty pointless.

It’s clear now where Microsoft is going with these ads. Big movie franchises being set up for multiple sequels often use a good chunk of the first movie simply to introduce and build up characters. That is what these first two ads are doing.

“Very shortly, we will move into another phase of the campaign that will be about Windows,” a Microsoft spokesman told the Windows-focused blog All About Microsoft tonight.

And that’s a good thing, because these first two ads certainly seem a lot more like ads for Microsoft founder Bill Gates. The problem, aside from seeming like an ad for a person rather than a product, is that Gates isn’t even in charge of Microsoft anymore; he retired earlier this year. That’s not exactly the best way to tell the public that Microsoft is looking forward rather than backward with the new products its working on.

While these ads are clearly about nothing, this one plays more like a significantly less funny episode of Curb Your Enthusiasm (the post-Seinfeld show by Seinfeld co-creator Larry David) rather than an episode of Seinfeld. In this ad, Seinfeld and Gates are house guests of a regular family. Seinfeld cuts his toenails, Gates is accused of stealing a toy giraffe.

It’s still not clear if these are the ads directed by the famous director Michel Gondry, but again, as with the first ad, I hope not. These simply seem to be a waste of his talent. If I were Crispin Porter + Bugosky, the ad agency Microsoft hired to handle its new $300 million campaign, I’d save Gondry for the part of the film with meat, not the build up. That is, of course, assuming there will be some meat.

Watch the uncut version below.