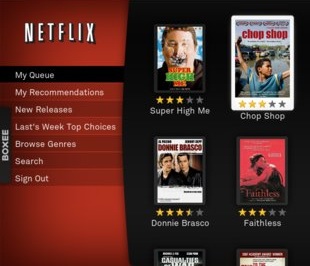 As set-top boxes that stream content over the internet to your TV become more popular, certain elements are starting to stand out to differentiate the best ones. Recently, the most popular of these elements is Netflix support. Roku has it, TiVo has it, some Blu-ray players have it and now even the Xbox 360 has it. So it makes sense that Boxee, the digital interface software company that hopes to land deals to get on set-top boxes, would add support for it. Today, it’s announcing just that.

But it’s not just that, the Netflix application that Boxee is using appears to be significantly better than the offerings of other current set-top boxes. That’s because while all of those simply allow you to browse the “Watch Instantly” movies you’ve already placed in your queue on your computer, the Boxee version of Netflix appears to allow you to browse from within the program itself.

I say “appears” because I’ve only seen pictures of it in action. I haven’t actually used it because, sadly, the Netflix feature does not yet work on the Boxee built for the Apple TV. The company says this is due to “hardware limitations” of the Apple TV, and that it’s their number one priority to get it working right now.

Boxee is also gaining new content today from TheWB, The Boston Globe’s Big Picture blog and MTVMusic. It has also updated the user interfaces for its Hulu, YouTube, CNN, Flickr and Picasa areas.

So Boxee now has content from Netflix and Hulu (along with a wide range of other providers). For some people, that’s the Holy Grail of streaming content. As soon as it can bring both into the living room via the Apple TV, I will be a very happy man. 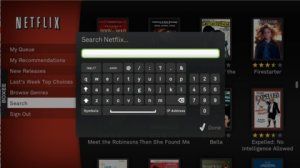 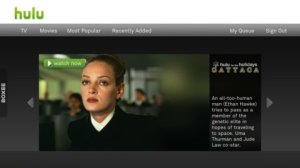