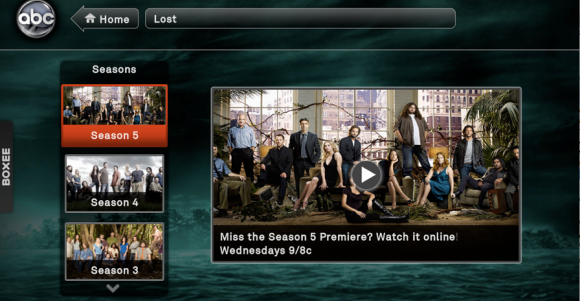 The new season of ABC’s hit show Lost premiered last night. Some people (me, for example) were busy and missed it. I was all set to buy the season pass on iTunes — but it’s $50 (in HD). I’d rather watch it for free, streaming at ABC.com, but that leaves me chained to my desk. Or it did until today, because media-center startup Boxee just added ABC support.

The addition expands an already impressive roster of services that Boxee is able to stream, including Hulu, CBS, Joost, YouTube and Netflix. When I pipe all of this into my living room via my Apple TV (by way of a safe and easy hack), it’s a streaming content nirvana. And all for the right price: free.

Right now, the ABC support is only working on Boxee’s Mac client, but Apple TV support is rolling out in the next few days, Boxee says. Windows and Ubuntu support will follow.

Lost was the most downloaded — read: most pirated — show on BitTorrent in 2008, according to Torrentfreak. While some people will undoubtedly always look for illegal means to get content for free, if it’s readily available for free on services like Boxee, supported by ads, that will be an option many people turn to — as we’re already seeing with Hulu. It’s all about the convenience of getting the content when you want it, how you want it. Boxee elaborates a bit in its blog post today:

If they [the networks] want to really eliminate illegal downloads they should release it simultaneously online (in HD) and remove the geo-restrictions, but i’ll save that discussion for another post.

Boxee raised a $4 million first round of funding from Spark Capital and Union Square Ventures back in November.