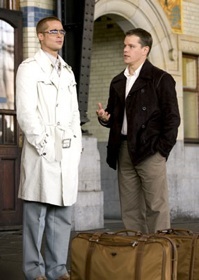 In the film Ocean’s 12, Rusty (Brad Pitt) says to Linus (Matt Damon), “Look, it’s not in my nature to be mysterious. But I can’t talk about it and I can’t talk about why.” Try asking a developer why their iPhone application was banned from Apple’s App Store and you’ll get much the same answer.

At least I did today when BoxOffice developer Cyrus Najmabadi informed me his app was allowed back into the App Store. “Unfortunately, the NDA restricts me from talking about it,” he told me when I asked if Apple told him what happened to get his app banned in the first place. There had been much speculation on the topic just nine days ago.

Obviously, it’s not Najmabadi’s fault that he can’t talk. The last thing I want is for him to get sued by Apple. But isn’t it a little odd that Apple refuses to let anyone know why some of these apps are being pulled from the store? What if it was a security issue, wouldn’t customers have a right to know?

Some of the other apps that have vanished so far have been for things less serious. PhoneSaber was pulled due to copyright violations of Lucasfilm’s Star Wars property. The $999.99 app I Am Rich was removed because of a “judgement call” by Apple. The tethering app NetShare seems like it was pulled because it violates AT&T’s terms of service for data usage. But BoxOffice, who knows? 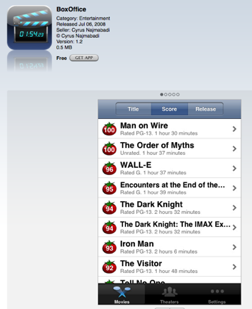 One would assume that if any application had a serious enough flaw, Apple chief executive Steve Jobs would use the application kill “lever,” he told The Wall Street Journal about this past weekend. Though it hasn’t been used yet, Apple has it in place to remotely remove application that may be dangerous.

I wish Apple would allow the app developers to be more communicative about why apps get pulled and what was done to allow them to come back. I also would like to know why quite a few have gotten by with apparent violations when Apple is supposed to be screening each one.

Whatever BoxOffice did wrong, it’s back now with a new version 1.2. New features include movie trailers, MPAA ratings, movie reviews and a way to favorite certain theaters near you. Check it out here, it remains a free download and is a solid app.