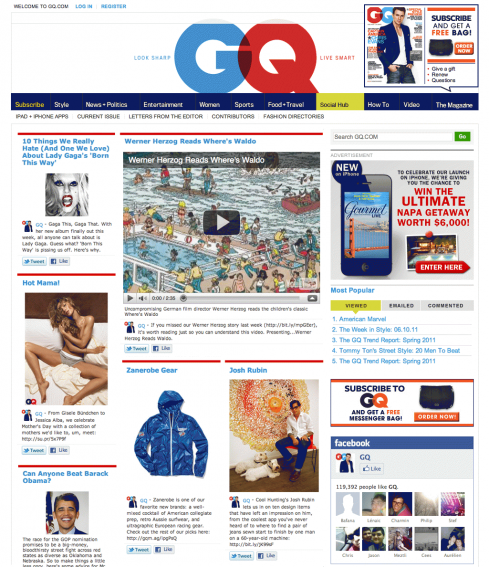 A brand’s social media is often left hanging lifelessly in cyberspace. All of those Twitter tweets, Facebook status updates, YouTube videos, press releases, etc. are disconnected and unorganized, not to mention hard to find for future use.

A new postcasting platform is changing that, and men’s fashion Magazine GQ  will soon take it live.

That platform is called Postano and it is being released today by TigerLogic, the Irvine, California-based data manager and application developer for Web-centric business software. Postano allows brands to consolidate  social media and news activity seamlessly on their websites on a customizable “Social Hub” page.

Postano was founded as a startup by Peter Yared but acquired by TigerLogic in August of 2010. [Full disclosure: Yared frequently contributes guest posts to VentureBeat]. Postano was initially launched as PostPost in December 2010 as a realtime, Facebook newspaper.

“PostPost got some traction, but the most traction was from brands asking if they could do their own version,” says Yared. “Hence, Postano.”

The initial launch for Postano was with “several” beta customers, but no one was given a go ahead to deploy until today.

“What we learned with PostPost, and learned quickly, is that socially curated news is boring,” says Yared. “There needs to be a mix of editorial and social curation. Social sites like Facebook are a great way to get engagement and earned media, but they aren’t a good way to drive traffic or monetize editorial site content. We’re seeing a boomerang effect where content and engagement features are starting to shift back to websites.”

Postano gathers social activity from multiple social media sources (Facebook, Twitter, YouTube, Tumblr, Google News, etc.) and renders it into a slick, realtime news page in a magazine-like layout. The look can be adjusted to fit brand style, making GQ’s site unique by using trademarks like the magazine’s signature font. Postano uses infinite scroll, allowing viewers to go back as far as they want into their social troves.

To see a live version of Postano, visit the new movie Queen of the Sun’s website.

Pricing is based on viewership and starts at around $10/ month for small blogs. While most Postano users are quietly in beta mode, it sounds like the platform is being used by a wide variety of websites.

“We haven’t been turned away from any of the companies we approached,” says Yared.