Confession: We’re tech news junkies. In order to be any good at what we do (tech blogging), we kind of have to be. A tech news junky’s best friend is an RSS reader — we troll hundreds of sources and thousands of stories on a daily basis looking for that one piece of news worth covering. But sometimes, that simply isn’t feasible all the time — you need an aggregator.

Many of us in the tech community know and love Techmeme, a tech news aggregation site. For finding the newest tech stories that people are writing about, there’s simply nothing better. Of course, there are sites that are bigger, like Google News. But have you ever tried to use Google News’ technology section (technically called “Sci/Tech”) to find timely items? It’s awful.

Case in point: A couple days ago, we were looking at the Google News tech section to scan the headlines. On the top was a story about The Beatles music on iTunes hitting a snag, the second story was about Facebook winning a $873 million judgement against a spammer and the third was about Blockbuster’s new set-top box. All good stories, except that every single one of them was at least one day old; some were two days old.

VentureBeat, which has a full-time writing staff of six, had covered each of the top five stories on Google News (which pulls articles from hundreds of sources) at least 24 hours beforehand. So had many of our competitors.

It would seem that the goal of a news site would be to have the latest news available for readers. Sure, some people want to see a bigger picture of what people are writing about, including stories that are a few days old (which is apparently how Google News operates), but that should be an option rather than the main feature of the site (kind of like FriendFeed’s “Best of” function).

It’s hard to know exactly why Techmeme (which has two employees) works so well in this regard while Google News (which is run by a company with over 20,000 employees) fails. That’s because Techmeme founder Gabe Rivera won’t share the techniques and algorithms he uses to filter the news.

At a basic level, it would seem that Techmeme is using a combination of weighted sources (some sites have a greater tendency of making a Techmeme headline) and links to a source to create its headlines and place them. Google News, probably does something similar, but doesn’t seem to have any filter for whether a story is old or not. This makes their page stale while Techmeme remains relatively fresh.

More importantly, it takes far too long for a big, breaking story to hit the main tech page of Google News. That’s likely because Google News is waiting for enough sources to write about it, while Techmeme is comfortable putting a big story on the site even if only one source has covered it so far.

This slowness is exactly the thing that stops a site like Digg from being a good source of breaking news. People submit the big stories early, but by the time it hits Digg’s frontpage (which most people read), it’s usually not that fresh anymore. That similarity is interesting when you consider that Google was recently attempting to buy Digg, supposedly to revamp Google News. 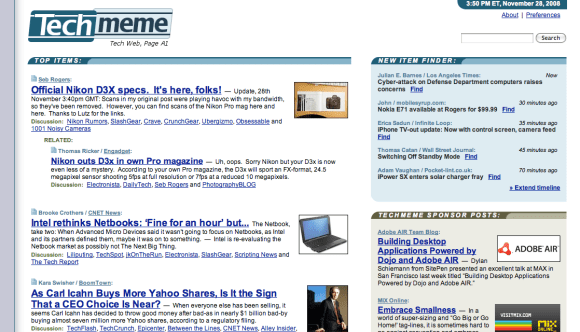 Sloth-like aggregation isn’t Google News’ only problem. Its method of determining which publications get headlines is also skewed, and it’s hard to tell why. Mainstream media outlets like the Washington Post, The New York Times, The Associated Press and others are more likely to get featured than their online rivals who break stories, and who often have analysis of comparable quality.

That’s not all. A few smaller tech sites appear to be vastly favored over blogs. ChannelWeb and eFluxMedia, for example both seem to be on Google News’ main page every time we look, with nary a tech blog in sight. Now we’re sure both publications do good work — we just read tech news all the time and we never hear about them breaking stories or providing sharp new analysis.

Again, contrast this with Techmeme: That site surely gives some sites more weight than others, but it’s a constantly moving scale, with newly launched quality publications like TechFlash, MediaMemo and others quickly finding a presence. More importantly, when a site breaks a story or comes up with some interesting analysis, Techmeme shows that others are linking to it. Credit, overall, is given where it’s due.

In sum, for those of us who constantly consume news, reading Techmeme is like eating at a four-star restaurant; reading Google News is like eating leftovers. Long-term, it’s easy to see where people with taste will increasingly go.