The Olympic torch relay has come to San Francisco today, on its way to China for the coming summer Olympics. Activist groups, predominantly those who are upset about China’s claim to — and ongoing occupation of — Tibet, have been planning massive protests.

Protests have been following the torch through cities around the world, and San Francisco has been slated by both sides to be a sort of climax. The city has one of the largest Chinese populations in the country (and which itself has mixed feelings about the protests), and it also has one of the largest populations of vocal political activists.  Yesterday, as this Reuter photo shows, protestors hung banners on the Golden Gate Bridge.

I’ve been trying to find breaking coverage on local television stations, but it’s been spotty — so far, the best source seems to be Twitter. Specifically, the tweets provided by Scott Beale of web-hosting company Laughing Squid (you can follow Beale here. See the screenshot below.

The fact that Twitter is a great source for breaking news is itself old news, but for our Bay Area readers, this is perhaps the most powerful example of it yet. 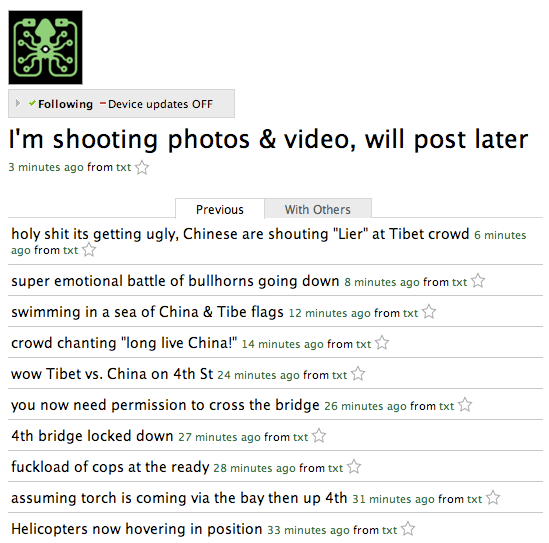