Location-based services (LBS) are becoming a dime-a-dozen in Apple’s App Store. Some, such as UrbanSpoon, Yelp and AroundMe are quite useful and popular. But those simply focus on finding places and activities (and mainly food) nearby your current location. More complex LBS social networks, which focus on tracking you and your friends, haven’t yet caught fire. Brightkite, which just launched its iPhone app, has the potential to change that.

The LBS social networks like Loopt, Where and Whrrl are all somewhat popular and useful to varying degrees. The problem, as I see it, is that while people are fine with downloading the apps to test out, after a few weeks (or in some cases a few days) people stop using them. That makes them useless.

Why do they stop using them? Because their friends aren’t using them. 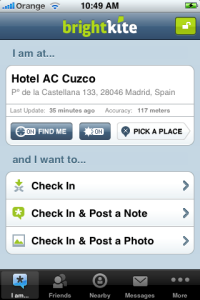 Brightkite has a chance to buck that trend because it has managed to maintain a fair amount of usage despite being a web-only (and text-based) app the past several months. And that was before web browsers like the new Firefox had location services built-in. Basically, users were manually inputting their locations all of these months to the service. With the iPhone 3G app, that gets a lot easier.

You start up the Brightkite app and it automatically finds you. Big deal, you might think, the other LBS apps do that too. But Brightkite’s strength lies in its easy-to-use interface and its ability to allow you to check in to actual places. The latter feature is nothing new. Google-owned Dodgeball has been doing the same thing for years, by letting you manually type your location into a text message (which you can also do with Brightkite). But now, the Brightkite iPhone app lets you more easily check in somewhere using GPS.

And that’s really the thing. The Brightkite app is really nothing groundbreaking, it just combines a lot of key LBS social network features together and does them right. Aside from checking into places, you can post notes that are tagged with your location, post photos tagged with your location, see your friends’ activity, send direct messages, post comments on messages, search people, places and posts and you can repost all of your activity automatically to the more popular micro-messaging service Twitter. 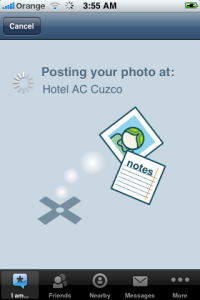 Curiously however, if you post a picture to Brightkite and have it set to repost to Twitter, it won’t show the picture, just your location on a map. It should show the picture and the map.

The service also has a feature to show you what other Brightkite users are nearby you. Loopt recently launched a feature like this which it called Loopt Mix. One key difference is that Loopt makes it so you must opt-in to Loopt Mix, and makes it so it’s very obvious as to how you can turn off that feature. Brightkite seems to send your updates to the “Nearby” area automatically, and it does not appear that you can opt-out of this (at least not from the app itself). Some users may be very wary of that, but if enough keep using Brightkite, it should spur some usage and new connections.

Brightkite’s iPhone app is solid. And it has enough users that it may push LBS social networks another notch towards mainstream usage. But for that to truly happen, I’m still waiting for the big social networks, Facebook and MySpace, to get into the LBS game.

It would also greatly help if Apple allowed these LBS apps to run in the background.

Brightkite’s app is available for free in the App Store. One downside: You have to have a Brightkite account, and the service is still in private beta testing. (Though plenty of users out there should have invites.)

Find me on Brightkite here.