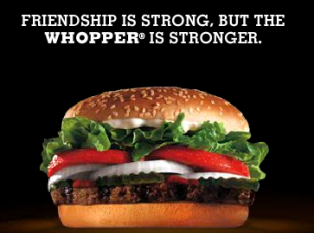 It looks like Burger King has been reading into the prediction that cutting down on Facebook friends is going to be trendy in 2009. The fast food chain has developed Whopper Sacrifice, a Facebook application that rewards you for doing just that — delete 10 of your friends on Facebook and score a coupon for the company’s signature burger. That’s much easier than the embarrassing tasks (naked handstand, anyone?) suggested by the application page. As Homer Simpson would say, “Mmm…burger.”

Here’s the twist: When you normally remove someone as a friend on Facebook, they have no idea that you’ve done so until they try to view your profile and can no longer access it (depending on your privacy settings). Given how loosely “friend” is defined on Facebook and the propensity of users to collect hundreds if not thousands of friends (they can’t all be your BFFs), the individual may never realize that you unfriended them. Facebook does not notify you when someone unfriends you, nor does it reveal the name of the person who removed you.

Burger King’s application, on the other hand, gleefully broadcasts the action on your activity feed, alerting your remaining friends of your cheaply-bought betrayal (the Whopper has been promoted for 99 cents before). The application also states that each of your victims will be notified. My vegetarian and vegan friends would not be pleased to read “Tam Vo has sacrificed Anthony Ha for a free Whopper” on my wall — a double diss because Anthony only eats veggie burgers. Awkward.

The brilliant campaign, created by savvy advertising agency Crispin Porter + Bogusky (its controversial “Whopper Virgin” commercial, which exposed people in remote areas of the world to commercial fast food, didn’t fare so well), capitalizes on the obsession and confusion over social networking sites, their etiquette and the accompanying drama, drama that often seeps offline. I know some people who take unfriending extremely personally, so try to sacrifice friends who never use the site.

By broadcasting and making public a sensitive type of action that’s normally kept private by Facebook, the Burger King campaign can go viral in a way that’s more compelling than announcing to ten friends, “I’ve spammed your wall and invited you to a useless application in order to eat lunch today because I am unemployed.” On the other hand, Facebook has no qualms about announcing to your friends if and when you are no longer in a relationship, with a cute little broken heart icon accompanying the message. Whopper Sacrifice sets itself apart from other applications by forcing a user to re-evaluate the strength of their Facebook friends, whereas most applications proliferate based on the strength of the relationship (I’m more likely to add an application if a friend I trust invites me to it). However, once you’ve sacrificed  that friend, he or she can’t retaliate by unfriending you in return, so there’s no possibility for revenge.

Of course, you have the option of immediately deleting the Whopper sacrifice announcement posted to your wall, and re-friending the people you removed from your list. However, Facebook is going to be concerned about the possibility of millions of users being unfriended, especially since it broadcasts notifications to those being unfriended. The promotion extends only to U.S. Facebook users so although Canadian and international users have expressed anger over being excluded, the amount of friends sacrificed in the name of greasy burger is not going to exceed the growth of new Facebook users joining the site.

Before you get the idea that axing 1000 friends equals 100 free Whoppers, the promotion is good for only one coupon per user. Whopper Sacrifice got a strong start so far, especially for a branded application (those apps usually get initial buzz but don’t sustain user interest for long) — as of this writing, 20,750 friends have been sacrificed for the love of red meat and a recession-proof (but not artery-proof) meal.