Nintendogs for the DS was a brilliant game. Its premise — pick a puppy and nurture it to adulthood — played on the digital pet theme that has driven high sales from Tamagotchi to Pikachu, and let you teach your dogs fancy tricks and skills that would improve over time, almost like it was learning.

But it wasn’t. A Nintendog’s behaviors were scripted, its personality restricted to a handful of breeds. On the other hand, Novamente, a company that aims eventually to develop a super-smart artificial intelligence (AI), says that its current technology will make such limitations remnants of the past.

The company claims that its virtual dogs, seeded only with basic skills and the desire to get food, water and rewards from their owners, will try almost anything to achieve these ends, including spontaneous behavior that was not written directly into the code. And dogs are just the beginning.

It might start out sitting and rolling over, but if that didn’t earn it some kibbles or praise, it would start to experiment. It might suddenly attack another avatar, bark at virtual squirrels, chase its tail or climb into its owner’s lap. If it watched its owner’s avatar hiding food behind a couch whenever another avatar was around, it might start hiding its food. If the owner jumped up and down every time they greeted the dog, the dog would follow suit, as long as the feedback was positive.

The primary limits on these virtual dogs’ possible actions, says Novamente founder Ben Goertzel, would come from the range of available animations and interactions with other virtual characters and objects, not from Novamente’s AI. But, as animations are not Novamente’s forte, this part will be a challenge. Its focus is on creating and enhancing a virtual brain.

Let’s build machines that can think.

There are a few companies trying to create human-level intelligence in a machine, also known as artificial general intelligence, or AGI. The one with the most buzz is Numenta. Founded by Jeff Hawkins, who also founded Handspring and Palm, Numenta is trying to build an AGI modeled on the human neocortex, the part of the brain responsible for spatial intelligence, perception, motor functions and language. Its goal is to take this model and apply it to problems that require sophisticated pattern recognition, like machine vision, robotics and data mining and analysis.

Novamente’s Goertzel says that a human-level AGI could be developed in a matter of years and that he has designed a framework in which to develop it. Built over the last seven years, the Novamente Cognition Engine uses a modular architecture designed to let specific specialized parts of the engine — some for memory, some for learning, some for language — guide every process but simultaneously distribute each one across the entire system.

See this diagram below. 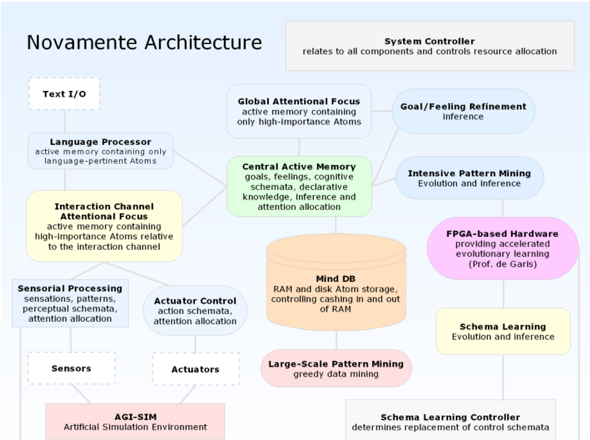 While Goertzel says that he has developed a theoretical framework and a system architecture that can enable a super-smart machine, he acknowledges that the hugely ambitious project still has a ways to go. Without substantial funding, Goertzel admits, Novamente will not be able to build the AI on its own.

The company has thus decided to make major parts of the Novamente Cognition Engine available as open source. This project, called OpenCog, received a small boost in January when the Singularity Institute, to which PayPal founder Peter Thiel is a major donor, agreed to pay two engineers to work on the project full time for a year. In June, Google, itself, decided to sponsor 10 OpenCog interns (mostly PhD candidates) for the summer. And on Friday, Novamente launched OpenCog Prime, a wiki that documents Goertzel’s entire vision — the theory, the architecture, and documentation on nearly everything that has been built so far.Of course, the company, which will now focus on creating an AI engine for virtual worlds, has kept some aspects of its technology to itself.

So what’s with the virtual dogs?

In a presentation made at the Googleplex last year, Goertzel argued that an AGI could never start off with a full set of skills. Much like a developing human brain, it would require substantial training from humans before it matures. Virtual worlds, Goertzel has written, could be ideal training grounds. For one, characters or pets in virtual worlds are far less complicated and expensive to implement and distribute than actual robots. For another, they can come in numerous forms. And, if they work well, lots of people will pay for them.

A virtual dog powered by Novamente’s AI, Goertzel says, would develop its own quirks. At the same time, each individual dog’s AI is connected to a greater whole, so anything it learns can be ready for all the others in almost real time. Balancing the collective dog AI with the individual dog’s AI to maintain each dog’s unique personality is a tricky problem. Goertzel says Novamente has it basically solved. But dogs are just the start.

The medium-term goal, Goertzel says, is a virtual parrot that talks. The natural language processing technology is not ready, but if it gets there, having widely distributed but interconnected virtual talking parrots could be a great way to train an AI to comprehend speech.

Goertzel argues that if virtual world behavior aligns at all with real world behavior, people will spend time and effort to get their virtual parrots to say the right things. The feedback loop described above would make each parrot more appealing to humans and make the AI increasingly capable of understanding speech.

Of course, there are tremendous hurdles to jump before Novamente can hope to get where it wants to be. As cool as it sounds, a virtual dog with a clever AI is a fairly long ways away from a computer that can talk. Even though they have proliferated into the hundreds, virtual worlds are still nowhere near mainstream — but with the right ingredients, that part could change fast.

The good news for Novamente — at least in the short term — is that an AI dog that works well could be quite lucrative on its own: Nintendogs sold over 19 million copies worldwide and those dogs were relatively dumb. Novamente would need a few outstanding game designers, which it currently lacks, but a well-executed AI-equipped Nintendogs-esque app for the iPhone would have tremendous potential.

I’d buy it without much real thought.