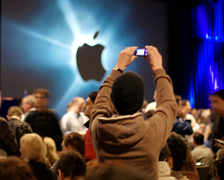 Some of you may recognize that Twitter’s recent downtime issues are a result of its architectural problems exposed by its rapid growth. However, back in the day (that is, January and the preceding months), Twitter used to crash the old fashioned way — when large events would bring a burst of usage. One of those events was the last Steve Jobs keynote at MacWorld in January.

Now another one is upon us.

Jobs will give the keynote at Apple’s Worldwide Developers Conference (WWDC) on Monday morning (10 AM PST). The question is: Given Twitter’s current state is there anyway it can stay online during the whole event?

The smart money is of course on “no” — but Twitter has surprised before, staying up for the majority of this year’s South By Southwest (SXSW) conference despite everyone believing it would crash and burn.

The next question is: What is everyone going to use if Twitter does go down? Sure, you could just constantly reload the websites covering the event (including VentureBeat), but it will probably be more efficient to get news via a micro-messaging platform.

The problem when Twitter goes down is that all of its users fragment over a number of sites. FriendFeed, Pownce, Jaiku, Brightkite — these are all contenders for the sloppy-seconds. Which one will you use if Twitter fails during WWDC? Let me know and I’ll try to meet you there. We need a back-up plan.

I’ve contacted Twitter to see if it was working something, such as disabling certain features, to help the service live through the keynote. I’l update if I hear back.

update: Twitter co-founder Biz Stone tells me that Twitter does in fact have a plan in place to stay up during the keynote. He also notes that they have a fun idea for the event (he didn’t elaborate on what). He also said that the backup plan is in fact to disable certain features as needed to keep the service up.

[Twitter is a nominee for best mobile company at MobileBeat2008, VentureBeat’s conference on July 24]