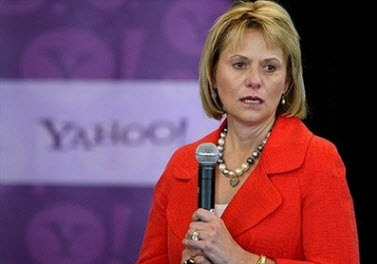 Yahoo chief executive Carol Bartz sat on the hot seat in an interview with Kara Swisher at the AllThingsD conference. Bartz managed to deflect and disarm tough questions with her sense of humor.

She said that she was open to talking to Microsoft about an acquisition if the deal came with “boatloads of money,” “good data” and “good technology.”

Right off the bat, Swisher asked Bartz what Yahoo was about. It was easy to say what Google was about. Bartz contended that Yahoo was also easy to describe. “We’re the place that millions and millions of people come every day to check in with the people and things they’re interested in. It’s the place where people find relevant and contextual information.”

She noted that Yahoo has 11 lead sites (such as Yahoo Finance) and has twice the number of email accounts as its nearest rival. It has a global reach with a local feel. Sub-sites such as Yahoo Sports should be the place where you can go to see Flip videos of your favorite local sports team.

Bartz said that people visit 85 sites a month but they really only spend time on one or two. She said that Jerry Yang first approached her for the job in November, after both attended a Cisco board meeting. Yang asked if she wanted to be CEO and Bartz made a sour face, saying she was not the right person. She said she came to see Yahoo as disorganized and thought she could bring structure to the company.

She started on Jan. 12 and was surprised at the silos within the company, like how the home page didn’t want to send traffic to Yahoo Finance. She asked if they could change the home page easily and was told the answer was no because there were 33 different code bases associated with the home page.

Swisher said that Bartz was at Autodesk, a traditional tech company. Then Bartz cut her off and said, “Are we leading up to I’m both too old and too stupid to know what the Internet is?”

Bartz said that Yahoo is very interested in social networking and video technology. She pointed out that video ads are growing four-fold by 2011 because people enjoy “video snacks.”

How can Yahoo get its groove back? Bartz said, “The best way to change a perception is do a good job and talk about it.” Check out the video below: