Carriers have long worried that they’ll be relegated to being “dumb pipes” as more developers churn out applications for mobile phones. But some new figures are now making those carriers change their stance, as we heard during today’s keynote debate on “Open Networks” at the CTIA conference happening in San Francisco this week. 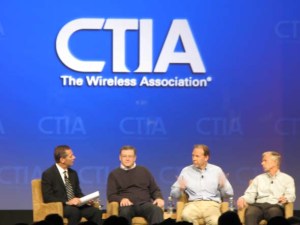 US carrier revenues for data totaled $14.8 billion for the first six months of this year. That’s an increase to 20 percent of their total revenue, up from the previous ten percent.

Of the various carrier representatives on the CTIA panel — which included Sprint Nextel, T-Mobile and Verizon Wireless — Open Handset Alliance (OHA) member T-Mobile was the most bullish about data revenue. T-Mobile chief executive Robert Dotson said that “T-Mobile focuses on how software and applications can get opened” and that applications will “unleash the innovation side”. He specifically touted the OHA, which is pushing Google’s Android software platform, because it makes building compelling applications for new technologies, such as location awareness, easier.

Asked about distribution opportunities, Dotson said he believes that “some stewardship and control” by the carriers is needed because “a wild west” for developers does not provide good quality for customers. There has been a debate on how open the new T-Mobile appication store will be, and from Dotson’s comments, it appears that T-Mobile has chosen to have some level of control. Dotson did, however, say that “walled gardens” — where carriers select a few applications to be featured on devices — are a thing of the past. He said carriers can shape a mobile web future they can live in.

His comments indicate a victory of sorts for Google’s OHA-based Android project, which provides an open platform for mobile application development — and Google’s long-term vision of the mobile web.

Android is coming together for carriers

The OHA intends to give carriers control over some aspects of mobile data and web services while giving third party developers access to carrier subscribers. Android, while sometimes compared to Apple’s iPhone software developer kit, is a lot more than that. It’s a platform that encompasses every software layer component required to create mobile operating systems and applications — and also software on other types of devices, like television set-top boxes.

The most prominent layer is the Android operating system, which will be featured on a number of phone handsets that we expect to be eventually released. This includes the HTC phone that T-Mobile will offer in the US beginning this fall — and the United Kingdom and Germany, we hear. In sum, as far as carriers are concerned, Android is helping them accommodate third party developers while letting them control the software interface for their subscribers. (More here.)

T-Mobile is the first carrier to really buy into the Android vision. Among other efforts, it plans to launch an “app store,” a pre-installed feature on T-Mobile phones where subscribers can browse and download third-party applications. T-Mobile may not be the only carrier offering a store for long. We also hear that Telefonica, a leading carrier in the Spanish and Portuguese speaking parts of the world, will be the next to launch one.

T-Mobile’s move, to some degree, is a counterattack against Apple’s success with the iPhone. Apple owns its App Store — not AT&T and the other carriers that offer the phone. Some carrier representatives we talked to told us that many carriers are displeased about the Apple App Store. Carriers have been leery of increased third-party applications because bandwidth-heavy applications, such as video, present higher costs for them. (At a conference I attended in Europe a couple of weeks ago, a carrier representative stated that YouTube eats up 17 percent of carrier network bandwidth in a “typical” European country; the T-Mobile app store tackles the problem by giving T-Mobile a higher revenue when apps or services take up more bandwidth.)

Google is still in the middle of negotiating terms with a variety of companies that have signed on to OHA to address the revenue-sharing concerns of all parties.

Meanwhile, Android itself has been coming along — although maybe not as fast as some in the media would have liked. Google recently released a stable version of the platform.

Android’s many pieces are not just for phones

Android and its OHA partners will be pushing development in both mobile and web technologies. To do this, Google has invested hundreds of millions of dollars in large, top-talent engineering teams that have been working on components for the last four years. This hard work is now paying off as Google uses core Android code for multiple products; from speaking with developers, for example, we’ve learned that over 60 percent of the code for Google’s new browser, Chrome, is shared with Android’s browser.

To get an idea of just how much Google’s put into Android, take a look at our following estimate of the amount of work it put into the platform compared to how much Apple put into its SDK. These approximations are based on information we’ve gathered about team sizes, average wages and the number of months put into each component. Android has cost Google hundreds of millions of dollars, sources say.

It’s now clearer why Google has put so much effort into the lower levels of this architecture. In regards to Chrome, you can see the effort it put in at the runtime level for Android. Android uses what is called the Dalvik Virtual Machine. Dalvik appears to be related to V8, the newly introduced Javascript Virtual Machine for Chrome (and a library-level Webkit project). V8 offers a potentially faster method of loading web pages that use a lot of Javascript.

The shared approach shows how important both projects are to Google. With the same technical foundation, they’ll allow very advanced applications to work across web browsers on any device.

A number of other important Android components have received little coverage so far, but will have a positive impact on Android phones and applications. These include the Linux kernel, the heavy work done in the libraries layer, e.g. the activity manager in the application framework and the ability of inter-process communications for all applications. Particularly, Android uses a newly-developed Linux kernel that can be deployed for desktops, servers and embedded devices — not just phones and computers, but television set-top boxes and many others. This is why we believe that Google intends Android to be a uniform platform on any web-connected device.

For more on technical aspects of Android and Chrome, check out its developer site and check out third parties like John Resig’s blog to see what he thinks about the V8 VM.

The various Android elements add up to some amazing numbers for memory consumption/efficiency and speed. OHA smartphones using Android with a 330 Mhz processor could be at least as fast as the iPhone and its 600 Mhz processor.

Meanwhile, contributions from another OHA partner, Qualcomm, will allow Android phones to take advantage of another gain: price. The company’s newest line of chips are the cheapest currently available for those smartphones that make use of 3G and GPS. Qualcomm Chief Executive Paul Jacobs has previously stated that the OHA is intended to “drive smartphones into the mass market price points under $200.”

Now imagine the pricing possibilities for handset manufacturers and carriers. Right now, in Europe, carriers tend to give away these 330 Mhz phones for free with an entry data plan (20 euros per month, or around $30). With the new chipset, handset manufactures could sell mobile devices in the performance range of an iPhone for around $200, without subsidies. Compare that with the iPhone, which costs between $600 and $800 without subsidies. Basically this difference will give carriers the option to set lower prices for data plans and drive ahead adoption of the mobile web.
Conclusion: Android’s manifestation

By enabling competitors to enter the mobile application market, Android is competing with the iPhone. But from what we understand, Google likes the iPhone because it promotes the mobile web and mobile usage. That’s what Google wants to have happen, in general, so it can do things like sell more mobile ads. In fact, Google shifted some marketing resources from Android towards the iPhone when the 3G iPhone got released, we’ve learned.

However, the iPhone is not expected to crack the smartphone mass market. “There’s a single manufacturer, it’s targeted at a particular demographic, and it falls far short of the 1 billion mobile phones sold every year worldwide,” as Rich Miner, Google’s VP of Mobile says.

Most people don’t realize that Miner, Android co-creator Andy Rubin and many of the Android team have worked together at Danger on the ‘Hiptop’/’Sidekick,’ a phone that debuted in 2002 in the US . The device was already seen as very sophisticated for its time. Especially because it was an internet-connected device that included a fully capable web-browser, an email client, IM and its own “app store” concept. As a result, it was seen in the industry as the device for the mobile web at the time. We hear, though, that Android’s founders were disappointed with it as they hoped it would fulfill a much bolder vision. Android is their next attempt at “cracking the mobile web.. In that view it is particularly interesting to see the changes in their approach today. In the past weeks Android has been criticized in many tech blogs, yet its team has remained silent. Google, per a pre-determined policy, left most public relations to the handset manufactures and carriers in the OHA.

As we argued before, Google understands that it needs to accommodate carriers everywhere to guarantee global distribution of both platform and phones. Per the revenue news today and T-Mobile’s plans, that strategy is starting to pan out.