Launching this evening is a new company that thinks it can be all things to all local searchers: Listings like Yelp, events like Going, and planning like Evite, all layered atop a rich, yet feathery-light social network.

Mouth watering? Too bad, because Center’d isn’t fully baked yet. But the site shows early promise, and a meeting with its founders today left me thinking it has potential to become something big.

Despite the multi-pronged approach, Center’d’s strength is in keeping its interface simple, and not trying to do everything itself. For example, the site offers rated business listings, but to do so, it ties into Yelp, InsiderPages, Judy’s Book, and other sites. For events, it does the same. That leaves the site free to concentrate on networking and planning.

No process on Center’d takes more than a few clicks. Putting together an imaginary night out with the VentureBeat writers was simple: With the site’s assistance, I picked a local bar, set a time, and made a quick list of things attendees should bring. If there’s any uncertainty over scheduling or location, a voting process for attendees can be set up, much like the professional scheduling tool Timebridge offers.

The social network, also, makes no effort to reproduce Facebook. Most interactions with others are centered around planning, but you can also see shared “saved” places — for instance, if you’ve got a favorite bar in Manhattan that you’ve saved, you’ll see if your friend in San Francisco also like the same place. CEO Jen Dulski says that combining your trust (or distrust) of your acquaintances’ preferences with ratings from outside sites like Yelp will provide a better local listings scheme.

Rather than aiming at people who are active on Facebook and MySpace, Dulski wants to target what she called “busy adults”, or people who spend their time out and about instead of hunched over their computer screens (an unfamiliar idea to me, but I’ll take her word that they exist). She says the initial target audience will be organizations like schools, churches and non-profits, which already contain groups of people that need to stay in touch.

That plan seems smart, but I have the feeling Center’d will need to tie in with Facebook et al to get the attention it wants. If I plan an event, I can’t just hope my friends are present on Center’d, I need to be able to send them an invitation on whichever site they prefer using — also a form of free advertising.

In the meantime, with its added functionality, I can imagine Center’d easily taking my visits from Yelp, Eventful and other sites. Having everything in one place is convenient, and could be a dark-horse tiebreaker for lockups like the battle between events sites that I wrote about last year. But the site needs more work; several times during my navigation, it froze up or ran slowly. Its listings, especially for events, also aren’t anywhere near complete, although all local sites suffer the same problem to one degree or another.

Center’d, based in Menlo Park, Calif., was founded in 2007. The company raised $6.5 million late last year from Norwest Venture Partners, Keynote Ventures and several angels. It has 11 employees. 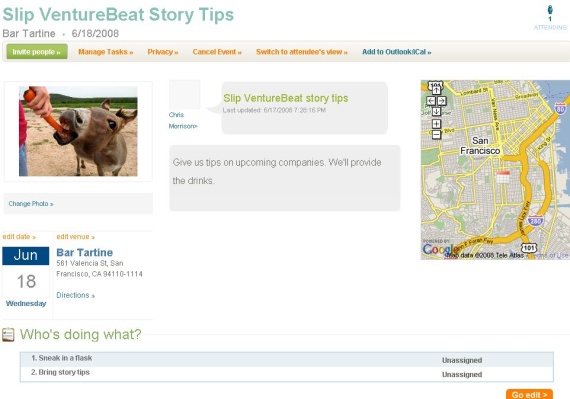