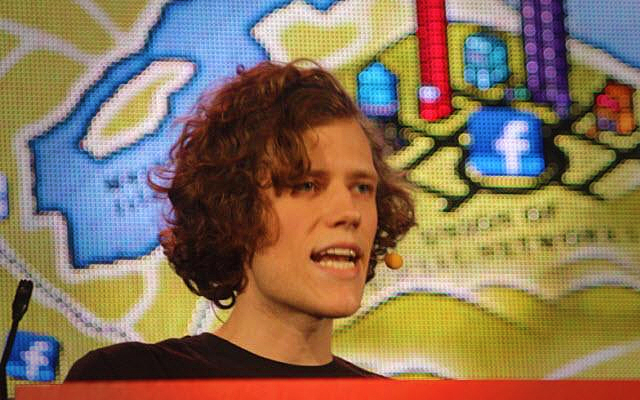 If you were starting your own web service, would you make people sign up for an account linked to their real-world names and faces, or would you allow them to post anonymously?

This is a debate that has raged online for a while, with strong advocates on both sides. Perhaps no one is more informed about the effects of online anonymity than Chris Poole, a.k.a. moot, the founder of anonymity-fueled community 4chan.

Poole took the stage at Web 2.0 Summit in San Francisco today to talk about identity and anonymity, two seemingly opposed forces shaping how we represent and (if we’re lucky) discover ourselves online. The young founder, who is now pouring more energy into Canv.as, an image sharing site, was passionate and eloquent in making his case.

“I don’t see myself as an advocate for anonymity any more than an advocate for identity,” he told the audience. “But I do like having choices. It’s disturbing to me that our options are being eroded by the big players in the identity space.”

The entrepreneur came down particularly hard on Google and Facebook for foisting what he called “a fast-food version of identity” on all their users.

“Google and Facebook would have you believe that you’re a mirror,” said Poole, “but we’re actually more like diamonds. Look from a different angle, and you see something completely different… Facebook is consolidating identity by making us more simple than we truly are.

“We all have multiple identities. It’s part of being human. We’re all multi-faceted people.”

Poole said he was moot, the rabble-rousing hacker. But, he noted, he’s also a son, a friend, and hopes someday to be a spouse and parent. And that portrait is a lot more complex than anonymous or identified, “real life” or “cyberspace.”

“The portrait of identity online is often painted in black and white,” he said. Facebook says you have one identity; anonymity represents something chaotic online… But you can incorporate identity without asking users to make sacrifices.”

Poole says each user represents something unique to each group he connects with online, and sometimes, it’s important to choose an appropriate representation for the part of yourself you’re expressing in a particular forum.

“Picking my AOL screen name when I was a kid took four hours… it was a representation of who I was. If you go to any hacker con and ask someone what their nae is, they give you a handle. That’s the name they identity with — the name they chose themselves.”

Poole says Twitter does a great job of handling anonymity, identity and all the shades of gray between. “There’s a rich form of communication that takes place because the stream is interest-driven, not identity-driven,” he said. “And its apps support multiple accounts. Personal, business, and the whole spectrum between.”

By contrast, Poole said of Google+, “I think [Google] missed a huge opportunity to innovate by following the same principles that Facebook set up.”

He said in the past, he had told some Facebook staff that their company “sets the bar in terms of identity and privacy online, and everybody follows suit.” However, Poole now thinks differently about that.

“We set the bar as users of the web,” he told the audience at Web 2.0 Summit, “and we’re quickly approaching this fork in the road. We’re about to sacrifice something valuable and special.”

Finally, Poole challenged both creators and users of web services to consider the following each time they make a new product or sign up for one: “Facebook and Google do identity wrong, Twitter does it better, and I wonder what the web would look like if we did it right.”