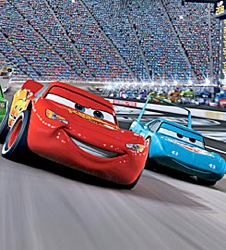 There have been a number of services popping up recently to tackle real-time search, trying to bring you information as soon as it appears on the web, rather than waiting for Google to crawl it. The latest contender is Collecta, a startup that describes itself as “the real real-time search company.”

Collecta bests competition like OneRiot and Scoopler on both the immediacy and breadth of its results, says chief executive Gerry Campbell. (Campbell has served as president of search and content technologies for Reuters, senior vice president of search for AOL, and head of commerce products/strategy for AltaVista Company; he was also an investor in Summize, the search company acquired by Twitter.)

By using the XMPP instant messaging protocol (the same technology powering Google’s communication and collaboration tool Wave), the San Francisco company can show information that’s truly in real-time, rather than items that are simply recent, he says. And while OneRiot and Scoopler focus on comments and links on social sharing services (and other other search tools, like TweetMeme, focus on Twitter), Collecta wants to provide results from the entire web.

I’ve played with Collecta a bit, and in my limited exposure those advantages don’t make a dramatic difference in the experience. Collecta provides its search results as a river that updates as you watch, and in its default mode it tends (like similar services) to be dominated by results from Twitter. But Collecta has some nice filtering options, so you can just see blog posts, or photos, or you can remove all the updates from Twitter.

And it does feel fast and immediate — if you pick a popular topic, you won’t end up sitting there idly, waiting for more results to appear. Earlier this morning, for example, Collecta found 77 results related to “iPhone” in a 10-minute period. (And since Collecta doesn’t show you content that was posted long before you started the search, all of those results actually appeared more-or-less during that window of time.) 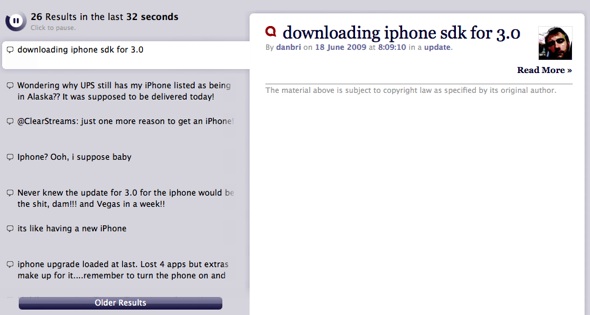 So with all the hype about real-time search, does Campbell think it could eventually replace traditional web search? Not exactly. He estimates that around 20 percent of all searches have a component of timeliness that would make them worth querying in Collecta.

“You go to our site to participate, to actually be involved in that Laker game, for instance,” he says.

As for making money, Collecta isn’t sharing details yet, but Campbell says the plan involves a combination of advertising and selling the search service to other companies. The company raised a little less than $2 million last year under its old name Stanziq.