There aren’t many big changes in comScore‘s July list of the United States’ 50 most popular online properties. Google‘s websites continue to occupy the top spot, with more than 141 million unique visitors in July, followed by Yahoo with 140 million, then Microsoft and AOL. But some companies are moving up fast, including CBS and Facebook.

We received an early copy of the list, and you can see the top 20 at the end of the article — ad-driven properties are in darker text, and the number of visitors is given in the thousands. (As we’ve noted before, you shouldn’t assume these third-party numbers are completely reliable, but rather use them as one of many data sources.) Here are some of the more interesting trends: 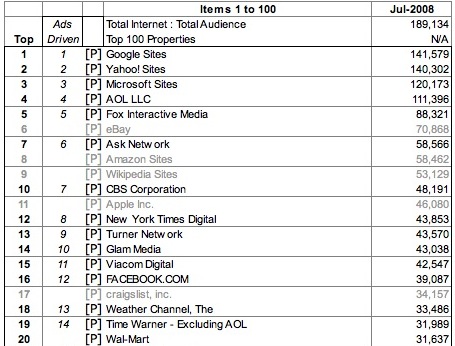