Google (which owns YouTube) accounted for 34.3 percent of the online videos watched in January, up 1.7 percent from December, according to ComScore. Not surprisingly, YouTube videos made up almost all of that viewership — 96 percent, to be exact.

Google’s closest competitor was Fox Interactive Media, which accounted for 6 percent of videos watched. (See the the chart below.) 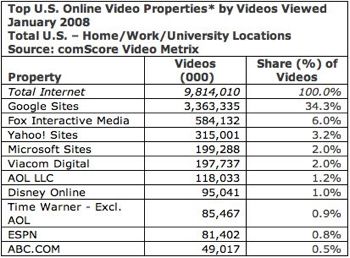 Overall, online viewership dropped to 9.8 billion videos watched, down from 10.1 billion in December. It’s not entirely clear what caused the decrease — we speculated that December’s surge was due to the Hollywood writers’ strike, but that strike didn’t end until February. Maybe some viewers decided online videos aren’t a good substitute for TV.

NBC-Universal and Fox made an ambitious bid to bring more viewers to the web with the launch of Hulu just a few days ago (our coverage). It’ll be interesting to see if that site, and others, can start pushing those numbers up again, or can put a dent in YouTube’s growing market share.