In what will come as little surprise to those who’ve been following recent rumors and reports, Jack Dorsey has finally confirmed that he is once again reprising his role as CEO of Twitter.

Cofounder Dorsey has held the interim CEO position since Dick Costolo stepped down on July 1. He previously held the role until 2008, before being replaced by Ev Williams, with Dorsey moving to chairman of the board. Dorsey then became  executive chairman when Costolo replaced Williams as CEO in 2011.

As part of today’s news, Twitter also revealed that Adam Bain is being promoted to chief operating officer (COO), having served as Twitter’s president for global revenue and partnerships since September 2010. Dick Costolo will be stepping down from the Twitter board with immediate effect.

3/ as I step off the board, two reminders: those banging pots and pans outside Twitter know the least about what's going on inside Twitter

Hip to be Square

The most obvious issue facing Dorsey as he officially returns to lead Twitter is the fact that he is also the CEO of payments company Square, which he cofounded with Jim McKelvey in 2009. But Dorsey was quick to address this potential conflict in a series of tweets.

“I’ve been CEO of both companies for over 3 months now,” he said. “I have the smartest, strongest, and most determined leaders in the world on my teams. My focus is to build teams that move fast, and learn faster. In the past 3 months, we have increased our speed and urgency at both companies.

“What we stand for gives us purpose, and that purpose dictates our job ahead,” he continued. “Square stands for economic empowerment. We stand for financial systems that serve instead of rule. We stand for leveling the playing field. Square is the most powerful set of tools to start, run & grow a business. Download Square, start selling. Download Square, get cash to grow.”

It’s an unusual situation for the CEO of such a major consumer company to be in — Dorsey’s basically touting the benefits of another company in his Twitter announcement. However, it’s an unavoidable issue, one that Twitter and Dorsey really had to consider. When discussing Twitter from now on, there’s no avoiding Square.

“Twitter stands for freedom of expression,” he continued. “We stand for speaking truth to power. And we stand for empowering dialogue. Twitter is the most powerful communications tool of our time. It shows everything the world is saying rn…10-15 minutes before anything else.”

Some will argue that rehiring Dorsey is a big gamble on Twitter’s part — can the head of Twitter really divide his time between two disruptive, transformative startups? Dorsey gave us a glimpse of his hectic work schedule way back in 2011, when he was CEO of Square and executive chairman of Twitter. He confessed that it requires a great deal of discipline to work what amounts to 16-hour days, spread across two companies.

However, Twitter is much, much bigger now — and Dorsey isn’t executive chairman this time around. He’s now the main man, the guy with the plan, the dude who everyone hopes will transform the company’s fortunes. As one of the company’s founders, Dorsey is in Twitter’s DNA, and many hope his return will herald a transformation akin Steve Jobs’ when he famously returned to save Apple.

“Both companies [Twitter and Square] have strong businesses and are well positioned to grow their impact in the world,” added Dorsey. “I will do whatever it takes to ensure that.”

Passing the CEO baton to Dorsey is a bold move for sure, but it’s one that will not only prove pivotal to Twitter’s fortunes moving forward, but could also have big implications on Jack Dorsey’s legacy and reputation.

In related news, during an investors call after the announcement, Twitter confirmed that it will soon be launching “Project Lightning,” a previously revealed tool that aims to show the best of Twitter to everyone — regardless of whether they’re logged into Twitter or not. This tool, which has been a long time coming, could be pivotal to the company’s on-boarding process.

Shares in Twitter dropped below their $26 IPO back in August, and today’s news heralded a small spike in the figure, which had fallen to $24.5 in pre-market trading. It closed yesterday at $26.31, so it will be interesting to see what impact Dorsey’s announcement has when markets close later today. 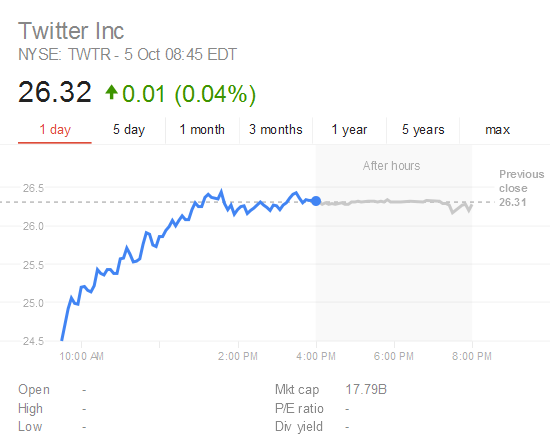