What happens when a celebrity gossip magazine like US Weekly collides with a wiki-like web application? Coolspotters.

A few sites (including Like) already match clothes with celebrities, but Coolspotters is a place for users to see, generate, and connect information about the products, places, people, fashions, and causes tied to the celebs, or “trendsetters.”

To many, including myself, this may not seem like a big deal — particularly because I’m not too interested in famous people and the products they use or the places they visit — but celebrity-watching is a worldwide past time.

The site was launched by web development company Fantzer (based in Collinsville, Conn.) in partnership with Pepsi little less than a month ago, and claims to have generated 104k unique visitors and 500k page views, with over 40 percent of its traffic coming from outside the US. Part of the reason for its success is that Fantzer snagged celebrity stylist Rachel Zoe as an advisor to Coolspotters to lend a touch more of credibility to the site and the spots created around celebrities.

CEO and co-founder Aaron LaBerge envisions Coolspotters as the “Google of people and products.” LaBerge, though, has more experience in the entertainment world than the search one.

LaBerge was the VP of Technology and Product Development for ESPN, overseeing the ESPN.com suite as well as the bottom-line tickers on the TV channel. His co-founder, Eric Kirsten, also worked at ESPN and is a serial entrepreneur who founded TrueChat and Ames Seminars. The two met at a kids soccer game Kirsten was coaching.

Users can create profiles of celebs, products and brands, aided by an auto-import feature that lets them grab photos and Wikipedia descriptions from the web. That profile becomes a mini-profile around the “spot” and is how users make the connections. In other words, every spot is a profile and every profile is a spot.

All the spots connected with a celebrity, say Lauren Conrad from The Hills (see screenshot below), are manually added by users based on having spotted that celebrity with a certain product or brand in the media. So if Conrad was spotted in People magazine with a Blackberry Curve, an eagle-eyed Coolspotter can connect Conrad to the Blackberry Curve, and it will then show up on her profile under her product list. About 10 – 20 power users are enabled as “community editors” to police the community — but eventually every single person will have that ability, a la Wikipedia.

Users can also add media, tags and become fans of their favorite trendsetters. Anything a user creates or becomes a fan of is then attached to his or her personal activity feed, which displays anytime another user creates a spot around that profile.

When Coolspotters launched, LaBerge says, it had 1,000 profiles and spots. Now it has over 6,000 profiles and 5,500 spots, with many more users browsing the content and associating themselves with certain products and brands.

It does extend well beyond big name celebrities to encompass products or brands such as Ironman, where a user can see all the people, places, and things associated with the legendary Marvel character, from the car Tony Stark drives all the way down to the watch he wears in the new movie.

The patent-pending technology, however, isn’t limited to the celebrity vertical. LaBerge hopes to return closer to his ESPN roots by using the technology to do something innovative involving sports scores, schedules and statistics, which he says have been static for years. That’s as much detail as he’d give me.

Besides Pepsi — which was a paying launch sponsor — Coolspotters is hoping to monetize via commerce, branding, and contextual advertising, using the targeted profiles it has created of each user based on the products and brands they’ve spotted and showed interest in.

While there are plenty of celebrity gossip, fashion, and shopping sites, none has as attractive an interface as Coolspotter’s. And in comparision to shopping competitors like Like, which use photo-matching algorithms to match what the celebrities wear to products users can buy, LaBerge argues that humans are smarter than algorthmic processes, remarking how hundreds of Coolspotter users can identify an exact pair of jeans with just a glimpse.

Fantzer so far is lean and scrappy; the team is at eight, all developers with the exception of Kirsten. 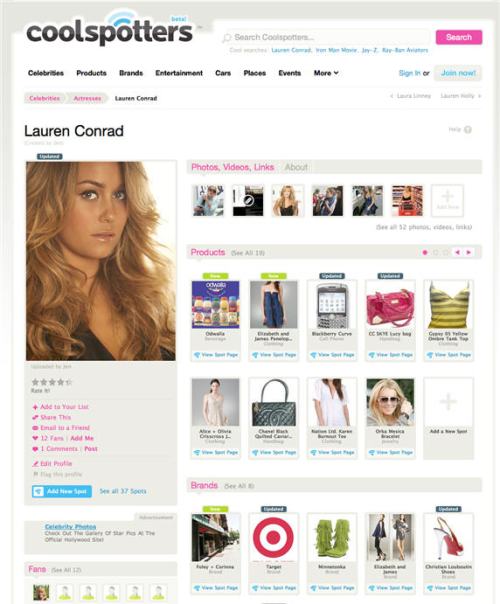