MONTREAL — If accelerators voted a “most likely to succeed” startup on Demo Day, CrowdMedia would have won the award hands-down last night at Montréal-based FounderFuel’s event.

Numerous investors I talked to last night said the crowdsourced photojournalism startup has a chance to get very, very big.

One even wanted to buy it outright.

CrowdMedia’s premise is simple: crowdsourced social photos shared on Twitter or Instagram are, more and more, becoming critically important to news coverage. So the startup offers an automated platform that gets those pictures out of social media and onto the front page of major news organizations, with rights cleared and money in the owner’s pocket … all within minutes. 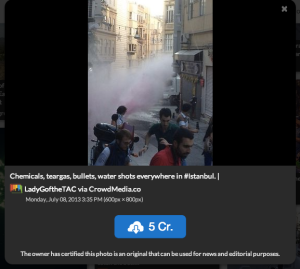 On June 7, literally 15 minutes after launching, the platform proved itself.

“There was a shooting incident at Santa Monica College, near where President Obama was. Within the first 15 minutes we were live,” Roldan said. “It was intense in the office.”

CrowdMedia’s platform, which combs through 150 million shared photos every day, searching for the .03 percent that are newsworthy, noticed the surge in attention, found the only photos from inside the locked-down Santa Monica college, cleared the rights with the student who took them, and sold them to publishers.

It’s not every startup that sees that instant kind of proof-of-concept. And the system, which is still in private pre-beta with a small group of media outlets, proved itself again last week during the Asiana crash at San Francisco airport.

“We got photos on the Huffington Post from people who were there,” Roldan said. “We caught these photos mostly by geolocation.”

The system is simple in concept: CrowdMedia’s platform finds social photos related to newsworthy events either by keyword or geolocation and automatically tweets the photographer, asking if he or she wants to sell them to publishers. Photographers click on the link in the tweet to a mobile site, and a couple of simple steps later, the photo is released and in CrowdMedia’s pool, where media organizations can purchase the right to use it.

Paul Ford, a VP at SoftLayer, told me he experienced the platform firsthand at Startup Festival in Montréal yesterday. After sharing a pic on Twitter, he was contacted by the system. 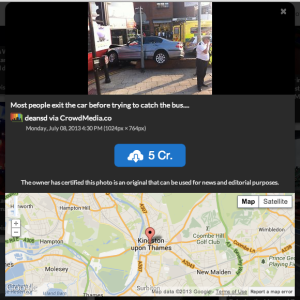 “It was amazing,” he says. “Like two minutes after I shared the picture I got a tweet from CrowdMedia. A couple of minutes later, it was for sale.”

But until now there hasn’t been a really slick, simple system to automatically find the best crowdsourced content and make it available to media outlets, which is why hot and interesting pictures on Twitter are often the targets of dozens of personal tweets from media organizations asking for the rights to the photo.

CrowdMedia does that, and does it affordably.

Media organizations pay a flat $20 for non-exclusive rights to new photos, with the original photographers getting 50 percent of the proceeds, and CrowdMedia taking 50 percent. Older photos that are less newsworthy sell for $5 each.

I wondered whether that’s too cheap, and whether there might not be some photos that are worth a lot more — like paparazzi-style photos of celebrities, or exclusive shots of major world events.

“We’re not interested in exclusivity,” Roldan told me.”You can sell exclusivity for a couple thousand dollars, very rarely. But we know that we can sell a good shot a thousand times, and that’s more money than you can get by selling the rights exclusively … and wasting two days for the negotiations.”

CrowdMedia is raising a seed round of $400,000 for launching in public beta, expanding its list of publishers, and continuing to build out its technology. I’d be shocked if that wasn’t oversubscribed and doubled after the attention the startup received last night from investors. The company is tackling a multibillion-dollar global market with a solution that does not need to scale users — the system does that automatically — but only needs to add media outlets.

The goal is complete automation of everything:

“Our vision is automated event detection technology that detect levels of noise everywhere, analyzes relevancy of photos automatically, get the rights from photographers, and then sends them to the right media where they are most relevant, all automated without any human touch,” Roldan said. 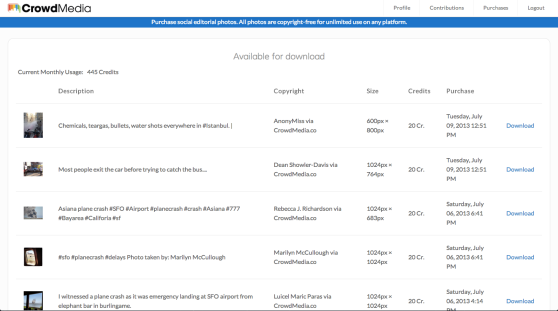 About 75 percent of that is built already, apparently.

One of the things that’s left is fraud identification — knowing when images are authentic. Social media aficionados will remember all the fake images of sharks in building lobbies that started circulating around the Internet after Hurricane Sandy — a situation CrowdMedia needs to avoid in order to retain credibility with news media.

But one common problem with startups, scaling users, is not a CrowdMedia issue.

“We don’t have to scale users — our platform finds users,” Roldan says. “Our platform sends photographers a tweet, and the response rate is exactly 23 percent. No one gets response rates like that.”

Scaling media organizations should not be terribly difficult either.

With news organizations like the AFB and Washington Post being sued for more than $100,000 per image they lifted from Twitter without permission, $20 for a photos sounds like very, very cheap insurance. Not to mention that it enables them to have massive reach in getting the best, quickest, most newsworthy photographs.