Funny to think that, while Facebook is a native app on mobile, it’s still trapped in the browser on desktop.

Scott Kyle, a Capitola, Calif.-based developer, decided to build his own: Current for Facebook. Current, which hit the top of tech product leaderboard Product Hunt today, is a $1.99 Mac app that brings the entire Facebook functionality to your desktop.

Born out of Kyle’s desire to improve what he found to be a frustrating browsing experience for the News Feed, Current is designed to spotlight elements such as photos and videos (they pop out into their own windows and tabs). The main app pretty much looks like a browser window with Facebook loaded into it — even the sign-in page is Facebook’s original homepage, not a fancy Mac app dialog box. When you click a link, it opens in a new tab, just as it would in a regular browser, but when you click on a photo or video, it pops open in its own window, freeing you to interact with it independently with it and your News Feed.

Photos are a core function of Facebook, having become the main repository for many of us who have been documenting our lives on Facebook for years, uploading to it any and all of our photos to share and store.

On the technical side of things, Current interfaces with Facebook’s JavaScript to render parts of it into different Web views, which is why it does look and feel like Facebook in the browser.

The Current app can also show up in your desktop menu bar at the top right, letting you quickly access Facebook chat, your messages, notifications. You can, of course, customize which of these you’d like to receive notifications for, allowing you to manage how much Facebook distracts you. 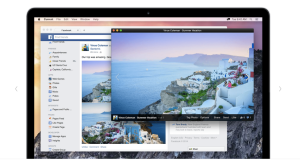 But Kyle also turned his attention to the messaging portion of Facebook, which is “a core part of using Facebook for so many users,” as he wrote in an email to VentureBeat. Facebook chat conversations with Current pop out into their own windows, and you could even use Current purely as a Messenger client if you want to. You can already do that with other clients such as Mac OS’s native Messages app, or third-party apps like Adium.

It’s also interesting how Current lets you split Facebook’s elements, much like Facebook did when it launched Messenger, its mobile chat app that it’s now imposing on mobile users.

Current isn’t the first Facebook for Mac app. Many others have built Facebook Messenger clients, without much success, and there have even been a couple of attempts to port the whole social network to the desktop. But Facebook killed its Windows and Firefox Messenger apps last spring, a move that’s not surprising given the company’s clear investment in mobile, especially in the past few quarters.

But I’d venture to say that Current might be getting at the core of Facebook, at least on desktop, much more than the company seems to understand. While some of my friends keep their chat turned off at all times, looking to prevent friends from interrupting them, I keep Facebook open on my computer precisely in order to have real-time access to chat.

Facebook is how we connect with other people (yes, Zuckerberg, you’ve achieved becoming the connector in my world), so why wouldn’t we want to have a convenient way to access Facebook chat on desktop? We’re on desktop during work hours anyway, so let’s optimize it.

While Facebook is spending a lot of money, energy, and engineering talent on mobile, I don’t think it’s leaving the desktop anytime soon.