The social news voting site Reddit took a step outside the norm back in January when it announced it would allow any Reddit user to create their own custom Reddit. If you liked candy for example, you could create a Reddit devoted to that and restrict its usage to ensure only the people you really wanted participated in your community. However, these custom Reddits still very much retained the look and feel of the actual Reddit, and thus they looked like more or less what they were: Sub-pages. That changes today.

Custom Reddits creators will now be able to fully customize the look and feel of their site as well as the domain name, according to a post on the Reddit blog. The look and feel element is changed by manipulating the Cascading Style Sheet (CSS) of the site (basically, using a fairly simple language to manipulate items like text size, text color, background images, etc..). You can also upload your own header image.

The bigger news may be that you can also now use your own custom domain name. Previously custom Reddits were found at the URL: http://reddit.com/r/YOURREDDITNAME — now you could use for example, CandyVotingSite.com. This is done by way of a custom CNAME, which gives your Reddit site an alias. This is the same way some Blogger and Tumblr blogs among others have their own customized domain names. 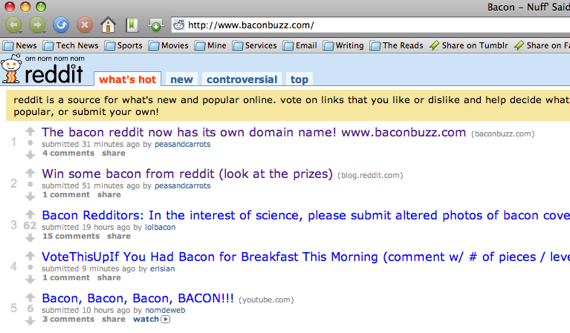 Since Reddit rolled up a major redesign back in May, it says traffic is up 300 percent. That’s impressive, but still doesn’t put it anywhere near its main rival Digg, according to numbers from web analytics company Compete. Ultimately, its bigger move may have been the opening of its source code, which it did back in June. Though it’s not yet clear how much that is being used by developers.

To spur growth even more, Reddit is also today announcing a contest for users who successfully launch their own custom Reddit. Any new Reddit or an existing one with less than 250 users has one month to grow their site as much as possible. The winner will get a bunch of stuff including a MacBook Air laser-etched with the Reddit logo, a $1,500 Apple gift card, a bunch of Reddit gear and some bacon, apparently. There are also prizes for the runner-up and the community that is best designed with the new customization level.

Obviously, this reeks of people going out there and spamming everyone they know to try and pump up their Reddit, but the site warns that this will not be tolerated.

I created one such custom Reddit back in January that has gained some popularity. Unfortunately (for me), that popularity makes it ineligible for the current contest.