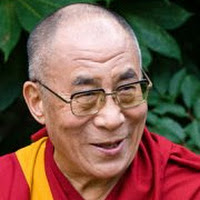 In what’s probably the biggest piece of publicity yet for Google’s young social network, the Dalai Lama, leader of Tibetan Buddhism, announced today that he’ll be doing a live Google+ Hangout with Archbishop Desmond Tutu.

Google has been pushing to get more celebrities on Google+ to boost its presence in the public eye. But unlike other instances of famous people on the social network (like Wil.i.Am), the Dalai Lama’s purpose for doing a video Hangout is much more practical than publicity.

For the second time this year, the South African government has refused to issue the Dalia Lama a visa application, which is necessary for him to attend the upcoming Inaugural Desmond Tutu Peace Lecture in the South African city of Cape Town. So, a Google+ Hangout is the next best thing.

“His Holiness the Dalai Lama will have a conversation with Archbishop Desmond Tutu by live video over a Hangout as part of the Inaugural Desmond Tutu Peace Lecture in Cape Town, South Africa, on October 8, 2011, starting at 10:30am South African time (GMT+2.00). A link to the Google+ Hangout will be available approximately 20-30 minutes before the event begins,” the office of the Dalai Lama wrote in a note on Google+.

The chat between these two peace activists is definitely a testament to the usefulness and potential of Google+’s video chat Hangout feature.