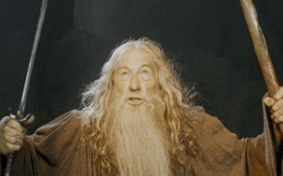 The Defense Advanced Research Projects Agency (DARPA) is the branch of the United States Department of Defense that works on crazy new technology projects for the military. Many of their projects sound more like science fiction or dystopian movie plots instead of feasible things. A new project doesn’t sound all that advanced, but it is potentially scary: Project Gandalf.

Gandalf, presumably named after the main wizard from J.R.R. Tolkein’s Lord of the Rings trilogy, is the codename for a program researching the use of radio frequency (RF) geolocation and emitter identification using specific emitter identification (SEI) for what it calls “specific signals of interest,” according to The Register.

More details of the project can be found in this PDF file. As you might expect, it’s dense, but basically, it sounds as if the government is looking for a way to use some sort of portable device to track other portable devices that emit signals — such as cellphones or radios. As the Register points out this kind of technology exists in certain things like surveillance aircrafts, but this new project seems to be intended for use by people on the ground in presumably hostile areas.

News of this project comes at an interesting time. Location-based services are quickly becoming hot items in consumers electronic technology — especially now in the United States with very consumer-friendly devices such as the iPhone 3G containing GPS chips for the first time. Location is becoming a part of social networks and is even spreading to web browsers now.

While I mainly write about the upside of location-aware services, projects like Gandalf should serve as a warning for the potential downside of such things. Imagine if you were always transmitting your location and the government could use a device to track you at all times. I think we all know that is coming eventually, whether we like it or not.

With location-based services, we make it very easy to track us, Project Gandalf is probably meant for things harder to track, as The Register notes. Hard to know what exactly that would be, but maybe something like your iPod touch (great news for those of you paranoid about having an iPod with a cellphone signal — the iPhone).

Whatever the point of the project, it’s interesting that the government is also thinking about location services just as many consumer technology companies are.