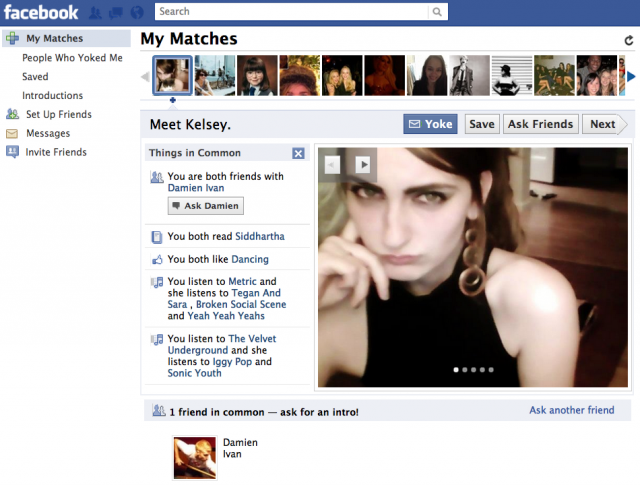 UPDATE: Yoke founder Rob Fishman wrote us to say another 2,000 people joined since last night, and we have updated the headline accordingly.

The hardest part about starting a dating site is getting a crowd of interesting people to join up that can be matched against one another. Some sites resort to buying up sleazy pre-made profiles, but the New York startup Yoke has another approach. It uses Facebook as the base of your profile, and matches you with single friends and friends of friends who share interests. In it’s first week, says founder Rob Fishman, the site has added 5,000 users.

Yoke doesn’t ask users to create a profile, it pulls data on gender, sexual orientation and what kind of books and movies you like straight from your Facebook account. It also hooks in to the Netflix API and looks at listening history from sites like Spotify and Rdio, then compares them to a taste graph made available through the Echos Nest API. Yoke also has their own API that matches users based on what college they went to (Harvard you say, I’m a Yale man myself).

What are the advantages to this approach? It’s super-lightweight. Users don’t spend any time creating a profile of themselves and answering innumerable questions about what they are and aren’t looking for in a new partner. The downside? The service is connecting you with people who never signed up for Yoke and may or may not be looking for a date at all. We know plenty of folks who list themselves as single on Facebook who are most definitely already attached.

“We only have a few thousand people signed up, but that means tens of millions of possible connections,” says Fishman, who previously worked as a social media editor at the Huffington Post. His co-founder, Jeff Revesz, sold his company Adaptive Semantics to HuffPo in 2009 and helped create HuffPo’s commenting system. Yoke is backed by a $500,000 seed round led by Lerer Ventures along with SoftBank Capital. “I’m on there using the service, along with the rest of the team.” They say a good startup always eats its own dogfood, and Fishman promised to update VentureBeat if he finds a new girlfriend via Yoke.