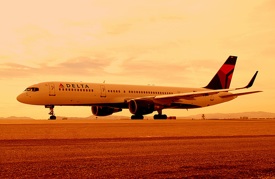 The promise of Wi-Fi on planes continues to creep closer to reality. Today, Delta Air Lines announced that its entire fleet of over 330 planes traveling throughout the continental U.S. will be equipped with wireless Internet.

The service will be provided using Aircell’s Gogo system which promises Internet access to laptops, smartphones and PDAs. Included will be VPN access for corporate fliers and interestingly, SMS text messages, according to the press release. The use of cell phones will still be prohibited, but I suppose you could fire up a voice over Internet protocol (VoIP) app and talk away (at least until they block that).

The privilege of Wi-Fi on your flight will cost you $9.95 for flights three hours or less and $12.95 for longer ones. While that may seem like a lot, it’s practically the price of a drink on a flight now, and the Internet will last a lot longer.

Delta will first begin outfitting its MD-88 jets as soon as next month, reports The Wall Street Journal. By the end of the year 75 planes should offer the service, with the rest getting access by next summer.

Aircell’s Gogo system is becoming quite the belle of the airline’s ball. Back in May it was announced that users of iPass, an Internet access service that a lot of travelers use, would soon get free access to Gogo systems on planes. At the time, it was announced that American Airlines and Virgin America had deals to implement Gogo Wi-Fi in late 2008.

I’ve made it clear in the past that I absolutely need Internet on a plane to make it a bearable experience at this point. Crowded cabins, shrinking seats and rising costs make me fearful of airports. But not everyone is in love with the idea; “I’m conflicted by this development since the plane was the last refuge from the Internet,” writes ZDNet’s Larry Dignan.

May one day thanks to this news, we’ll start seeing the reactions in the commercial below.