There are more than a few ideas floating around for how to challenge Google’s dominance in search, from natural language to community editing — enough that you might be forgiven for losing track of which ideas seem most important. But by Google’s own standards, social search engine Delver should be pretty high on the list of companies to watch.

Delver, which is launching to the public today, is counting on your friends to tell it which results to deliver. The engine connects to a variety of social sites, like Digg, FriendFeed, LinkedIn and MySpace, to create a “social graph” for each of its users, in which friends and second-degree connections are ranked from most to least important. The content that those friends create or share is then used to feed the Delver engine.

There are some immediately obvious uses for that kind of search. Say you’re looking for a good place to eat or a movie to see; if your friends have been talking about food or movies, their thoughts will come up in your search. But Delver could also be useful for less obvious groups. Researchers, for example, could get improved results as long as they had similarly geeky friends, especially if those friends published research and talked about their studies on public sites.

So why would Google care about a site like Delver? Well, as a specific startup, it probably doesn’t. But in an interview early this year here at VentureBeat, Google VP of search Marissa Mayer explained that, rather than natural language, semantics or another tech-heavy approach, the search giant is interested in personal knowledge. “The social component of search is actually very important, and it hasn’t translated well yet to the internet medium,” she said. 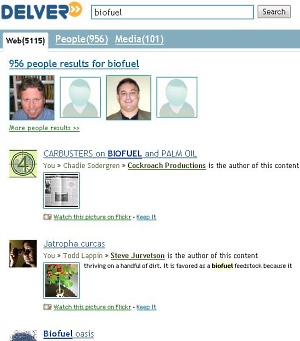 Social search is a broad term that includes human-powered (read: volunteer work) search by companies like Wikia. But Delver seems like a more immediately promising scheme. Like the existing search engines, it’s running an automated process. And what affects the results is fairly straightforward, resulting from the number of your friends and the quality of the content and conversations they create while online. Initial searches I ran on the engine showed that its results are very different from a standard search, turning up both junk and surprising gems I wouldn’t have otherwise found.

Delver will be working on that experience over the next few months, and meanwhile marketing itself to a broad audience; CEO Liad Agmon says, “We don’t want to be another Twitter or Friendfeed, with a very small subset of users conversing among themselves.” Instead, he hopes the engine can be integrated into existing social networks, where it could gain a respectable user base while continuing development.

Without a tie-in to the networks, Delver’s path looks a bit more challenging. While it’s not necessary to give Delver the names and passwords of your accounts on other sites, the engine does require a sign-up process that takes several minutes, and subsequent logins to work. That’s a concept most searchers will be unfamiliar with. Google, which has Gmail and other services to keep many users signed in, would have an immediate advantage there.

The other obvious question is what Delver will do about advertising, but Agmon says it’s going to hold off for at least a year, citing thorny privacy issues as a reason not to mine users’ social networking profiles for valuable marketing information.

The company has taken about $4 million to date, from Israel’s Carmel Ventures. It will probably start looking for more funding in early 2009.