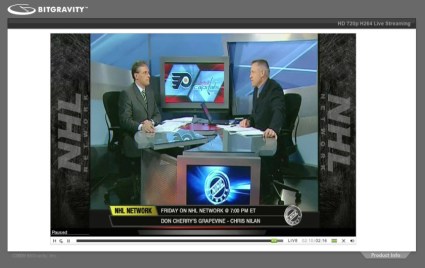 BitGravity is launching a digital video service today that allows its customers to stream high-definition videos over the Internet.

The BG Live service can stream live events in 1080p or 720p resolution (the same quality as high-end TV sets), according to the company’s announcement at DEMO 2009 today.

The Flash-based service does not require that customers download a viewing client, and Burlingame, Calif.-based BitGravity says the service is inexpensive and easy to set up. Perry Wu, chief executive of BitGravity, said the HD service is an improvement over the standard-definition service BitGravity introduced a year ago at DEMO 2008.

Last year, BitGravity won a DEMOgod award and streamed more than 50 billion pieces of data. Among the events streamed live were the Democratic and Republican national conventions and President Barack Obama’s inauguration. At the local level, schools in the Bay Area the service to live-stream football games.

The new service streams data at a rate of 1.5- 2 megabits per second, which most cable modems and DSL lines can handle.

Customers for the existing service include IAC, Revision 3 and Sling. Big media companies are among customers using both the standard definition and HD services, but BitGravity does not have permission from those customers to identify them, Wu said. The company makes money by charging its customers fees for delivering the video streams and for storing digital assets.

BitGravity was founded in May, 2006 by Wu and Barrett Lyon, chief technology officer. It has raised $14 million to date from Allen and Company and Tata Communications. Competitors include bigger rivals Akamai Technologies and Limelight. The company has 50 employees and is not raising money now.

I tried out the HD service at one of the company’s partner sites. It works great, streaming HD video full screen to your computer over a broadband connection. There is only a six-second delay, which is better than other services out there. You can see for yourself. DEMO will be using BitGravity to stream live demos of presentations at the conference at http://www.demo.com/live.