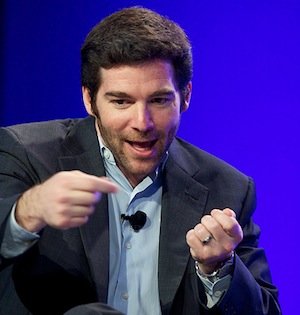 Weiner said professional networking has evolved from a man with “chiclet-white teeth” handing out his business cards at a conference. And that’s reflected in LinkedIn’s evolution too. While many people think of LinkedIn as a place to look for jobs, and Weiner acknowledged job searching is a “killer app” for the site, he also said it has become more of a “professional dashboard.” People can now use LinkedIn to get work done by connecting to people with information and resources that they need.

LinkedIn may need to work harder to promote its features, Weiner said, but its efforts are already catching on. He said the company has invested heavily in bringing more status updates to the site, for example by making it possible to cross-post updates between LinkedIn and Twitter. In the last 12 months, LinkedIn status updates have increased by “well over 10x,” he said. And he repeated a statistic that LinkedIn shared earlier this year, that more than 1 million businesses have active profiles on LinkedIn that users can follow.

Weiner also dodged questions about whether LinkedIn is preparing for an initial public offering. The thing to remember, he said, is that an IPO isn’t LinkedIn’s big goal.

“For us, going public, raising additional financing, liquidity, those are tactics — those aren’t outcomes for us,” he said. Reminding the audience that LinkedIn now has more than 75 million members, Weiner said that the site’s goal is to connect and create economic opportunity for all the professionals in the world. “An IPO event would potentially be one tactic on the way to making that happen.”