WidgetBox is one of 65 companies chosen by VentureBeat to launch at the DEMO Spring 2010 event taking place this week. These companies do pay a fee to present, but our coverage of them remains objective.

Rich real-time media, from video ads to Twitter feeds, is pushing aside the old banner ad. But advertisers and publishers don’t have an easy way to create rich media ads quickly.

That’s why San Francisco-based Widgetbox has created ClickTurn Ad Builder, which turns the creation of rich media ads into a self-serve automated process. If it catches on, it could transform all of the advertisers who are stuck with boring banner ads into creators of the coolest ads. Widgetbox is revealing the ClickTurn Ad Builder at the DEMO conference this week.

An example of a rich media ad is a typical banner ad box. But you can load the box up with things like Twitter feeds, Facebook fan page links, polls, a photo gallery or YouTube videos. The ad actually has a lot of stuff that the viewer might want to look at. The success rate of the ads is far better than banner ads, which are now so tired that they’re clicked on just 0.13 percent of the time, according to statistics gathered by Google’s DoubleClick. 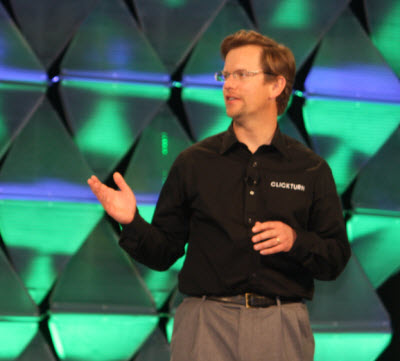 “The problem is that people have become ad blind,” said Will Price, chief executive of Widgetbox. “We’re enabling everybody to create much more engaging ads.”

But roughly seven out of eight advertisers can’t afford the weeks of time and big budgets that it normally takes to create a custom rich media ad. Widgetbox, which is the biggest resource for creating Internet widgets, has created an automated, do-it-yourself ad builder that gives brand managers and web publishers a self-service template. Using a drag-and-drop process, they can use it to create rich media ads in a matter of minutes or hours. They can insert tracking pixels into the ads so they can get immediate analytics information on how well the ads are doing. And since the ads contain real-time components, the brand managers can change the ads on the fly to roll with the consumers.

ClickTurn also makes it easy to build a companion mobile site, built in the HTML lingua franca of the web, for iPhones and other smartphones. Those ads can be sister units to the display ad, allowing the advertiser to expand the impact and reach of their ads into the mobile space.

It’s like the widgetizing of rich real-time media, said Will Price, chief executive of Widgetbox. The company has been successful creating a do-it-yourself engine for widgets, or platforms for launching small apps, like a weather page for a user’s local area. One of the customers that likes the idea is ad agency Universal McCann. Marc Ruxin, executive vice president and chief innovation officer there, says ClickTurn enables his company to turn around real-time ads fast without losing creativity.

The ad builder requires no knowledge of code and lets you customize the ad to any media. It lowers costs of making ads and comes with professionally designed templates. If you want to add social content to a rich media ad, you simply click on an icon such as Twitter or Facebook and the coding is done automatically. Besides Universal McCann, clients include LinkedIn and IDG Communications.

The company has raised $14.5 million in three rounds of funding from Sequoia Capital, Hummer Winblad, NCD Investors and angel investor Michael Derring. Price said that managers at LinkedIn asked Widgetbox to create something that automated the creation of custom rich ads. Starting last August, the company began working on the problem.

When an ad runs, Widgetbox gets paid a CPM fee, meaning the fee is based on how many people see the ads. Widgetbox targets major publishers such as CBS Interactive or LinkedIn. Those publishers essentially act as Widgetbox’s sales force, signing up advertisers to create the rich ads with the ad builder. A number of big advertisers from Sprite to Gap have used the ad builder.

Widgetbox has 22 employees. Rivals include rich media ad leaders such as PointRoll, EyeWonder (bought by Limelight Networks for $105 million), and EyeBlaster, which recently filed for an initial public offering. Price said that his company’s tools let advertisers create rich media ads far more quickly than those companies can.