Friends have been slowly abandoning Facebook over the past few years. But outrage has intensified following the company’s refusal to condemn President Trump’s posts after the killing of George Floyd in police custody and ensuing protests.

I understand this fury, having repeatedly grappled with the company’s various failings myself. What I find more baffling is that the triumphant decision to quit Facebook is often accompanied by a more dubious call to arms: Come follow me on Twitter!

This is not just anecdotal. On June 4, following the Twitter-Trump dustup, Apptopia reported that downloads of Twitter’s app hit a new daily record.

So in the wake of this Twitter lovefest, let’s be clear about the respective merits of the two platforms. When it comes to staking the moral high ground, Twitter is no better than Facebook. And by many measures, it is worse.

This reality is currently being obscured because Twitter CEO Jack Dorsey made the decision to place warning labels on a handful of tweets by President Trump, calling them out for “glorifying violence.” This seems to offer an ethical contrast to Facebook, which refused to take similar action as CEO Mark Zuckerberg insisted the company would not be an “arbiter of truth.”

I would agree with just about every critique one could make of Facebook. It has essentially become a delivery system for disinformation and dangerous content. That includes it being used to foment genocide. Its use of personal data remains troubling. And Zuckerberg’s muddled leadership in recent years has only added to the sense that none of this will be fixed.

Facebook’s mistakes also feel more ominous because its presence is so massive. The company’s main platform has 1.73 billion daily active users, which doesn’t include products like Messenger, WhatsApp, and Instagram. The stakes for Facebook blowing it are amplified by this gargantuan reach.

Twitter seems small by comparison, with around 170 million users per day. Its user growth is so anemic that the company stopped reporting growth and has switched to other metrics that focus on how much users engage with the service.

But let’s take that as a starting point. Twitter’s power extends far beyond its platform, and Trump’s tweets are the perfect example. It’s not what Trump posts on Facebook each day that turns the news cycle upside down, it’s his tweets.

Whether it’s a handful of outrageous statements and lies or hundreds, Trump’s tweets are dutifully reported as news in papers and on TV. They are fact-checked, debated, and in the process, massively amplified. And given the extraordinary attention they receive, millions of people feel the need to respond, from politicians to average users.

This has the desired effect: It makes us angry and divided. That emotional blowback is a core feature of my own experience on the platform. Within minutes of checking Twitter, I stumble across something that infuriates me and overwhelms me with stress. This happens far less often on Facebook, and when it does I can unfriend the individual, block their comment, or simply remove them from the conversation. Twitter has only just begun rolling out limited tools for controlling replies and retweets, but these remain fairly weak.

In part, that’s because Twitter’s product development moves at a snail’s pace by Silicon Valley standards. But that’s also because at heart Twitter remains an open platform.

“Openness” is typically held up as a virtue. But in Twitter’s case, the lack of oversight is what makes it so fundamentally toxic. Anyone posting a comment or replying to a conversation risks being overwhelmed by vicious responses from largely anonymous users. Much of the commentary is openly racist and misogynist, such as this exchange.

This is, after all, the platform that was largely responsible for Gamergate, a tidal wave of harassment directed at female game developers. Celebrities have also become juicy targets, with Stranger Thing’s Millie Bobby Brown quitting after becoming part of a homophobic meme and actress Leslie Jones temporarily leaving the platform after receiving a barrage of hate-filled tweets over her part in the most recent Ghostbusters movie.

Twitter’s openness has also left it far more vulnerable to bots that automate tweets in response to the most incendiary or critical topics. Last month, researchers at Carnegie Mellon reported that about half the accounts tweeting about the coronavirus were bots.

In a recent blog post, Twitter execs noted that they “permanently suspend millions of accounts every month that are automated or spammy.” From Twitter’s point of view, bots are fine unless they engage in some kind of platform manipulation. That includes such no-nos as: “Malicious use of automation to undermine and disrupt the public conversation, like trying to get something to trend” and “artificial amplification of conversations on Twitter, including through creating multiple or overlapping accounts.”

Likewise, Facebook has disclosed with some pride that it removed 3.2 billion fake accounts during a six-month period last year. In both cases, these numbers also indicate the extent to which these platforms are under assault every single moment.

In that respect, Facebook is failing, in large measure because it has outsourced content moderation, according to an NYU study that I wrote about today. The author of that study, Paul Barrett, who is deputy director of the NYU Stern Center for Business and Human Rights, decided to focus on Facebook as a case study of the content moderation issues that plague all social media platforms.

But during our conversation, I asked for his thoughts on Twitter. And he didn’t hesitate to note that Twitter’s track record is far worse.

“So far as I know, Twitter doesn’t have a systematic fact-checking program the way Facebook does,” he said. “Now, Facebook’s program is far from perfect and way too small and insubstantial to meet the challenge of potentially harmful content. But they’ve at least made an effort in that regard. Twitter historically has not.”

That laissez-faire approach can lead to some shocking lapses. In France last month, users awoke to a trending anti-Semitic hashtag #sijetaitjuif (If I was Jewish). The hashtag remained at the top of Twitter’s trending subjects for much of the day, despite having just 2,000 tweets and being widely denounced.

Likewise, in the midst of the Black Lives Matter protests last week, the hashtag #WhiteLivesMatters bounced to the top of Twitter’s trending list, in many cases promoting stories about white people being killed by a black person. 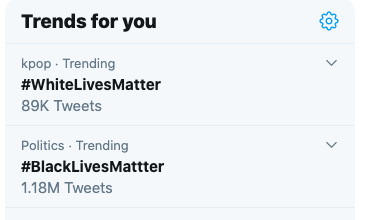 These hashtags were obviously intended to be incendiary and were likely amplified by bots, thanks to Twitter’s open platform. But still, how could someone in Twitter’s global workforce not have noticed and at least taken action to remove them from the trending list so they wouldn’t benefit from that promotion?

The answer is simple, and it’s pretty much the same for Facebook. Hiring more moderators and taking more action costs big money. Facebook is far more profitable and so has invested more in these efforts than Twitter, which has struggled to monetize users and remains far weaker financially.

In both cases, the problems will persist, due to the fundamental nature and architecture of the platforms. Both have become the perfect delivery vehicles for hate, disinformation, and all sorts of toxic content.

I don’t blame anyone for quitting Facebook in disgust. Just don’t kid yourself that retreating to Twitter puts you on the moral high ground.