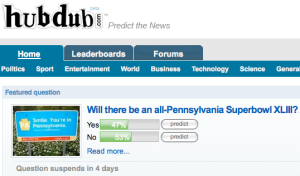 Predictions are all the rage right now. Obviously, since it’s the beginning of a new year, everyone wants to forecast the year ahead, but also with a weakened global economy, everyone is looking for answers for when things will turn around. Hubdub, a site that attempts to harness those predictions, and turn them into a game of sorts, has just closed its first round of funding.

The service works by granting users virtual currency to stake on whether they believe predictions made on the site will be right or wrong. For example, looking at the homepage of Hubdub right now, you will see a bunch of football-related predictions (we’re getting close to the Super Bowl), some Academy Award predictions, some stock market predictions and some eccentric ones such as “Will Barack Obama use his middle name when taking the oath of office?” Clicking on any of these takes you to the prediction page where you can wager an amount on an answer based on how certain you are of something happening (or not happening as the case may be). If you’re right, you get more money. If you’re wrong…you get the point.

Hubdub says it has a quarter of a million unique visitors trading around 100,000 predictions a month. Google Trends shows it growing at a pretty healthy pace. The service is currently partnered with several large publishers including Retuers, The Independent and The Huffington Post, and will use this new funding to futher grow its partnerships.

The service showed up on our radar for the first time over the summer when it launched PunditWatch, a service to track predictions made by some select blogs and top pundits. VentureBeat was included in that list, and while I had some problems with the way predictions were scored (mainly in the difference between actually making a prediction and just reporting on a rumor), it was hard not to like the results: when the contest closed in the fall, VentureBeat edged out Silicon Alley Insider as the “most accurate” tech blog when it came to predictions.

I personally also faired well in Hubdub’s recent individual top tech pundit awards for 2008, taking the top prize for the predictions I made on my personal blog at the end of 2007, prognosticating what would come to pass last year. (Yes, my back is red from all the self back-patting.)

The Edinburgh, Scotland-based Hubdub’s $1.2 million (£800,000) first round of funding was led by Pentech Ventures and Scottish Enterprise’s Scottish Co-Investment Fund (SCF). A group of Hubdub’s angel investors also participated in this round, including Rikki Tahta (the chief executive of covestor.com), Simon Murdoch (the chief executive of friendsabroad.com) and Tim Jackson (founder of QXL.com).


Hubdub screencast from Rob on Vimeo.