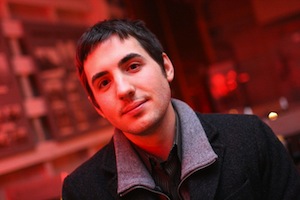 Jay Adelson, chief executive of social news aggregator Digg, said he will leave the company as it plans a major overhaul. Kevin Rose (pictured), who founded Digg, will step in in an “interim” capacity.

The company’s blog post is pretty perfunctory, and includes brief notes from both Adelson and Rose. Adelson leaves just weeks after Rose gave a sneak peek at a freshly revamped Digg at the SXSW Interactive conference in Austin, Texas. Adelson said he wants to listen to “the entrepreneurial calling” and explore startup ideas.

That doesn’t feel like a satisfactory explanation. Adelson, a cofounder of data-center operator Equinix, had commuted from his home in New York to run the San Francisco-based company for years. Only recently did he move back to the Bay Area and buy a house in Mill Valley — which if anything would suggest an increased commitment to Digg.

Rose said: “While I’ll miss working with Jay day-to-day I am excited to be taking on the role of Chairman and acting CEO, driving Digg forward on our promise to enable social curation of the world’s content and the conversation around it.”

Rose infamously posed for a BusinessWeek cover as the “kid” who “made $60 million in 18 months” in 2006. However, while Digg scored the magazine cover almost four years ago, the company has since been eclipsed by other startups that were also featured in that BusinessWeek issue — most notably, Facebook. Other services for sharing news like Twitter have also pushed their way into mainstream consciousness as Digg struggles with the perception that it only caters to young male tech “fanboys.”

The original design of the site presented a single homepage to users based on the entire community’s collective votes. Digg enthusiasts rapidly learned how to manipulate or “game” the site, giving them the ability to direct a firehose of traffic to the sites they favored. And publishers built so-called “Digg armies” of organized voters — often employees and their friends — to boost traffic.

The company is gearing up to launch a new version of Digg which will personalize the site based on a user’s connections on Digg and other social networks. That should in theory make it harder to “game” the site, but could also make it less influential as a source of traffic to online publishers. The redesign will also feature instant story submissions and votes. Any keyword will be able to have its own category and users won’t have to log in to vote for a story. The company has also been experimenting with advertising that can be voted up or down. The company says the program, called Digg Ads, has been a success.