Just yesterday, the social news voting site Digg announced that it would begin rolling out its new Recommendation Engine in beta to users as soon as this week. For me, that day came today. I’ve been testing it out for the past couple of hours and I must say, I’m pretty impressed.

As I expressed yesterday, my problem with Digg over the past several months has been the feeling that everything on the front page is stale content. I’ve already read most of it well before it gets there. Delving into the “Upcoming” section has more interesting stories, but again, the first few pages are pretty stale to me. Finding useful information required a lot of digging (both literally and figuratively).

The Recommendation Engine takes a lot of that hassle away because it serves up items it thinks I will find useful based upon my previously dugg stories. While it hasn’t been collecting that much data on me (it promises to get better with time as it collects more), I’m already finding useful items that I probably wouldn’t have found otherwise. 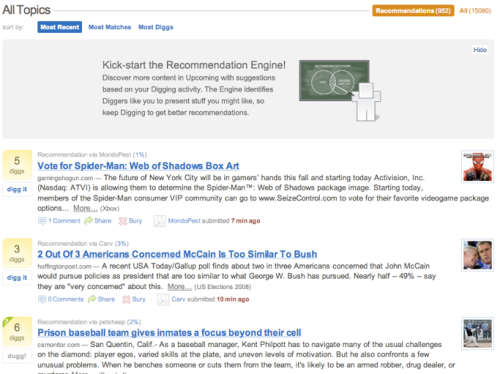 You can sort the recommended items by “Most Recent,” “Most Matches” or “Most Diggs.” To me, the most interesting one is Most Recent, because it shows you fresh content that is still actually meaningful to some other diggers. The problem before with going to Most Recent in the regular Upcoming section is that 99 percent of the stories just submitted at anytime were crap.

It’s also interesting that scanning the “Diggers Like You” section (those users with similar digging habits responsible for many of my recommendations), I only see a couple names I recognize — and only one person that I had “friended” on the service. This tells me what I already knew: The previous Digg “friend” system was pretty worthless.

Early on, Digg made it so you could friend other users and see the items they digg, but this quickly became little more than a way to form cliques — cliques that often served little purpose other than to digg each other’s submitted stories.

This system seems much more natural. I can friend those users like me if I want to, but there is really no need to, the recommendation engine will work regardless.

I can honestly say that I’m having fun using Digg again for the first time in months with this feature. Quite a few people jumped to point out that many recommendation engines online simply don’t work, after reading my initial thoughts yesterday that this may make Digg useful again. Especially now after trying it out, I really believe that this may work. It’s not perfect, but it’s giving me a lot of content I find interesting. Just like the old days.