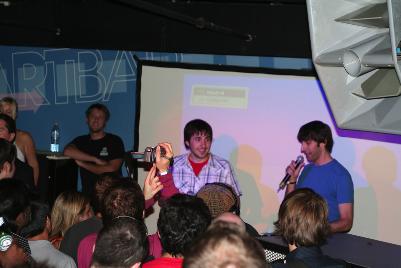 News aggregator site Digg plans to introduce “sub-Diggs” that let small groups of users create their own news aggregators, similar to what smaller rivals Reddit and Mixx already offer, according to The Windy Citizen. It’s not clear if this means sub-sites within Digg.com or if users will be able to use Digg’s software to create completely separate sites — Reddit has notably open-sourced its software code to enable the latter.

Also, this is especially interesting because Digg just announced that it will integrate Facebook Connect into its site. This way, Facebook users can sign on to Digg with a single click, then display their Digg actions (like “digging” a story) within their Facebook’s news feed. One can imagine groups of Facebook friends easily creating their own mini aggregators to so they can collectively filter the news they care about most.

San Francisco-based Digg says it will roll the sub feature out within the next half year.

The news was announced at a Digg meetup yesterday in Chicago. There, the Chicago Tribune newspaper also announced a widget that will display its top stories on Digg within its own site — a way to encourage its reader to vote its stories up. The Wall Street Journal, The Guardian and other top publications already offer various ways of integrating Digg with their content.

Also at the meetup, Digg chief executive Jay Adelson (wearing a blue shirt in the meetup photo, above), responded to recurring rumors about the company getting purchased by Google. “There is no word,” he said. “We commented on one of these rumors before and it got us in trouble. There is nothing to say.”